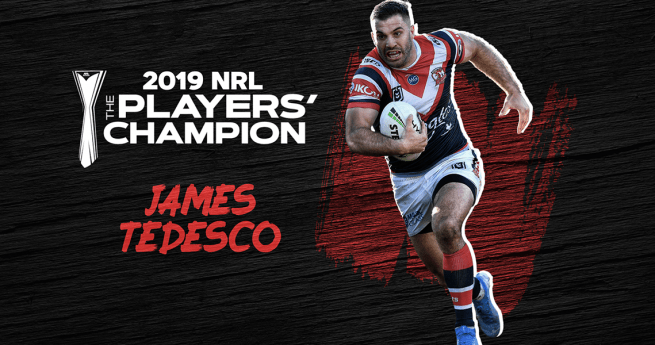 Sydney Roosters’ fullback James Tedesco has been crowned The Players’ Champion by his NRL peers tonight at the Rugby League Players’ Association’s annual awards ceremony at Foxtel on Oxford.

Having previously received the honour in 2017, Tedesco is just the second player to have won the prestigious award more than once – with retired superstar Johnathan Thurston the only other player to have achieved the feat.

The 26-year-old finished ahead of finalists Cameron Munster, Payne Haas, Cameron Smith and Roger Tuivasa-Sheck in the end of season player poll, capping off an incredible year for the superstar fullback.

Tedesco accepted the honour just over a week after his side’s Telstra Premiership victory and has won a host of other awards including the Dally M Medal, the Brad Fittler Medal and the Wally Lewis Medal.

The Dennis Tutty Award – which recognises a player who has acted in a selfless way throughout the year in advancing the interests of their fellow players – was awarded to Parramatta Eels forward David Gower.

Broncos prop forward Haas, who finished as a finalist for the NRL Players’ Champion, was awarded the Rookie of the Year for 2019.

The event also celebrated 40 Years of the RLPA, with key figures from the Association’s history including a number of former players in attendance on the night.

RLPA Chief Executive Ian Prendergast congratulated the award winners and acknowledged the special guests from the Association’s past who joined the celebrations.

“I would like to congratulate all award recipients unveiled tonight as part of The Players’ Champion event,” Mr Prendergast said. “These awards are about celebrating greatness in the eyes of those who take the field each week.

“Congratulations to both James and Jessica on being recognised by their peers as the best from their respective competitions.

“James has no doubt had an incredible season, he has won nearly every award possible this year and is now The Players’ Champion with his peers acknowledging his extraordinary efforts.

“James also won The Players’ Champion honour in 2017 while he was at the Wests Tigers and now joins Johnathan Thurston as the only players to have won it more than once.

“We are proud to this year introduce the NRLW Players’ Champion award, with Jess enjoying a stellar year with the Dragons and a deserving winner of the inaugural honour.

“The event was a great opportunity to not only acknowledge the current champions of our game, but also reflect on our champions of the past as we celebrate 40 years of the RLPA.

“I want to thank everyone who joined us for the event, including some of the pioneers of the Association, and also pay tribute to everyone who has played a role in the RLPA’s history.”

The Finalists - The Players'...