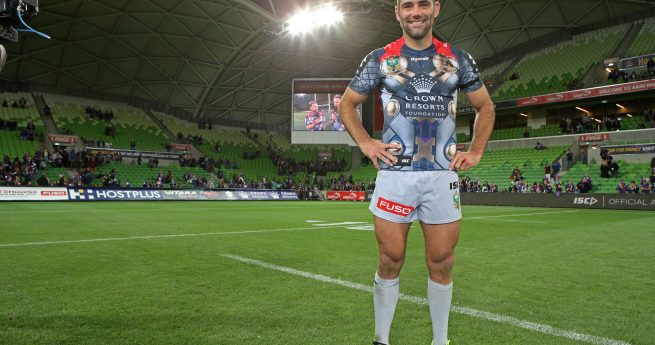 RLPA General President Cameron Smith has officially become the most successful NRL player of all-time, notching up his 238th career win against Penrith on Saturday night.

The Melbourne Storm captain overtook Darren Lockyer for most career wins with his side’s 28-6 victory over the Panthers at AAMI Park.

In a stellar career, Smith is now just 10 games short of his 350th NRL appearance and could potentially become the most capped player of all-time later this season (Lockyer holds the record with 355 games).

Smith was admirably humble when speaking about the milestone in the post-match press conference on Saturday night.

“You don’t really think about milestones or records too much, you focus on your job each week,” Smith said. “I didn’t know until last week when we beat the Wests Tigers and someone mentioned to me that I’d equalled Locky’s winning record.

“We’ve (Melbourne) only been around for 20 years and we’ve got three players in the top 10 for most wins ever.

“The competition’s 110 years old, there’s a few clubs that are 110 years old and we’ve got the most players in the top 10. It’s a pretty special effort for our organisation.

“For me it’s a nice milestone to achieve and a nice record to have but I’m just very thankful that I’ve been a part of a special footy club around some wonderful people.

“Obviously I’ve been coached by Craig (Bellamy) for pretty much my entire career and playing alongside some of the greatest players who have played our game. They’ve all contributed to that record.

“That number sits beside my name but I couldn’t have done that without Craig, the coaching staff that have been here throughout my career, all my teammates and of course my family as well.”

The RLPA would like to congratulate Smith on achieving this outstanding milestone.