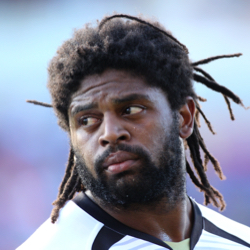 The 26-year-old has played a total of 131 first-grade games since making his debut for Canterbury-Bankstown in 2008 — playing four seasons for the Bulldogs before spending two years with the Titans from 2012 and with the Panthers from 2014.

The 2009 Dally M Rookie of the Year has agreed to join Wests Tigers in 2017 and will add plenty of experience, size and skill to the Club’s first-grade squad.

After spending 18 months away from rugby league, the Forster Hawks junior said he was excited to be making his return to the NRL with Wests Tigers.

“For me, it’s so exciting as there are a lot of up-and-coming young players here,” said Idris. “The average age is really young, and they’re only going to get better and more experienced. If they do that together, then they’re going to gel well as a team and that’s really exciting.

Wests Tigers CEO Justin Pascoe said that the signing of Idris was an exciting one for all Members and fans following on from a strong 2016 season.

“As a Club, we are really pleased to have Jamal at Wests Tigers next year,” Pascoe said. “We’re thrilled that he’s decided to embark on the next stage of his playing career with us.

“We all know what he can do on the field and we look forward to seeing him do it in a Wests Tigers jersey next season,” he said. “Jamal’s been a fan favourite everywhere that he’s played and I’m sure that Wests Tigers Members and fans are excited to have him with us.

“We had a lot of positive signs both on and off the field in 2016 and Jamal’s signing is another step in the right direction for this organisation,” said Pascoe.

Head Coach Jason Taylor said that having a player of Idris’ experience and natural ability would be a great addition to the Club’s first-grade squad in 2017.

“We’re really looking forward to having Jamal join us ahead of the 2017 season,” said Taylor. “He brings a lot of size and strength to our outside backs which is something that we identified that needed to be improved on for the coming year.

“He’s played the game at the highest level and comes to Wests Tigers with a lot to prove,” he said. “Jamal’s been working hard over the last couple of weeks to ensure that he’s ready for the start of pre-season and he’s incredibly motivated to get back into the game and we’re really happy that he’s decided to do it with us.”

Unchanged Kiwis line up to...