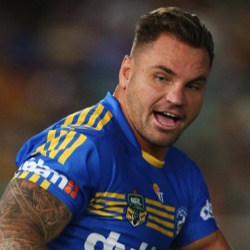 The Parramatta Eels  star today joined Deputy Premier and Minister for Justice and Police Troy Grant and Attorney General Gabrielle Upton in launching Graffiti Removal Day, which will be held on Sunday, 18 October 2015.

Watmough encouraged fans and sporting clubs of all codes to join this year’s graffiti removal efforts.

“Footy players and fans wondering what to do with their Sundays once the season is over should come along to Graffiti Removal Day, wear their footy jumpers and show what team spirit is all about,” Watmough said.

Watmough added he hoped the success of Graffiti Removal Day would make vandals think twice about tagging other people’s property.

“A lot of kids get involved in graffiti because they’re bored, but if they really want an adrenaline rush they should take up sport – it’s a great way to have fun, get fit and make friends,” Watmough said.

“Communities across NSW are fed up with graffiti: it’s ugly and costs the state an estimated $100 million each year. That’s money that could be better spent on things that matter like hospitals, roads, schools and sporting facilities. Graffiti Removal Day is about getting local communities involved to stop graffiti once and for all,” Ms Upton said.

“The only tag I want to see as we launch this year’s Graffiti Removal Day is the hashtag #rolluptorollout and we urge people to spread the word on social media and turn out on 18 October,” Mr Grant said.

Graffiti Removal Day is a joint initiative between the NSW Government and Rotary Down Under. It is supported by a range of organisations including the NRL, Scouts Australia, Girl Guides NSW & ACT, Australian Men’s Shed Association (NSW Branch), PCYC, NSW Police, high schools and local councils. To volunteer or nominate a clean-up site, go to Graffiti Removal Day website to complete an online registration form.

Titans Legs Out for Lymphoma