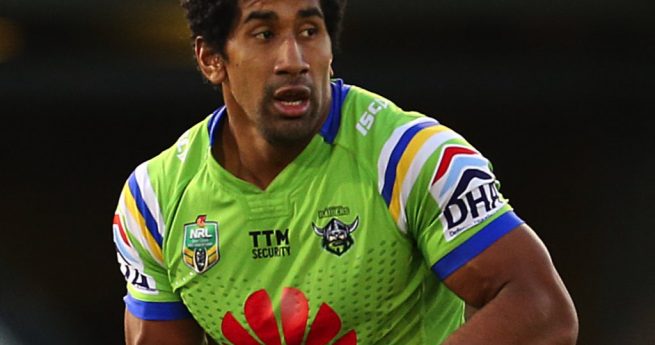 Sia Soliola has signed a two year contract extension which will keep him with the Canberra Canberra Raiders until the end of the 2018 season.

Soliola’s current deal was until the end of this season, with his two year extension a priority for the club as they look to secure their playing roster for the future.

Arriving in Canberra from St Helens at the beginning of 2015, Soliola made an instant impact on his return to the NRL and collected the prestigious Meninga Medal for the clubs best and fairest player in his first season with the club.

Soliola said he’s looking forward to the next two seasons with the Raiders and was thrilled to be a part of what he believes is a squad heading in the right direction.

“I’m excited, relieved and really happy to be staying here for another couple of years. This is a great club and place for me and my family. We love this place and it’s got a great pool of talent with all the boys,” Soliola said. “Ricky has done great things here. It would have been pretty silly not to consider this club because it’s such a great club with a great history.

Soliola said he believes the Raiders can taste success over the next few seasons and thanked all of the clubs members and supporters for making him feel welcome.

“The ultimate goal is to win a premiership and get Canberra back on the pedestal they belong. I think we have a squad that can be successful for sure,” he said. “I want to thank everyone for taking me on board and embracing me as one of their sons. I’m excited to represent them as one of their own.

Raiders CEO Don Furner said the re-signing of Soliola is an important one for the club both on and off the field with his leadership, playing versatility and standing amongst the playing group all huge positives for the club.

“Sia leads by his actions in everything he does and the respect he receives amongst the players and staff here at the club shows what a wonderful asset he is to our organisation,” Furner said. “In terms of his playing ability he can play both on the edge and in the middle of the field, with his experience and knowledge of the game a valuable tool for our younger players.

“What he does for this club off the field is equally important, whether it be amongst the players providing leadership, advice and feedback or the work he does in the community, you could not ask for a better role model and quality individual. It’s a pleasure to have him as part of the Raiders and he’s a player other players can aspire to become.”

Soliola is currently out with a broken arm and is hoping to return to the field in the next 3-4 weeks.

Photo: Soliola in action in Round 3 of the 2016 competition. (nrlphotos.com)

NRL steps up its Voice...