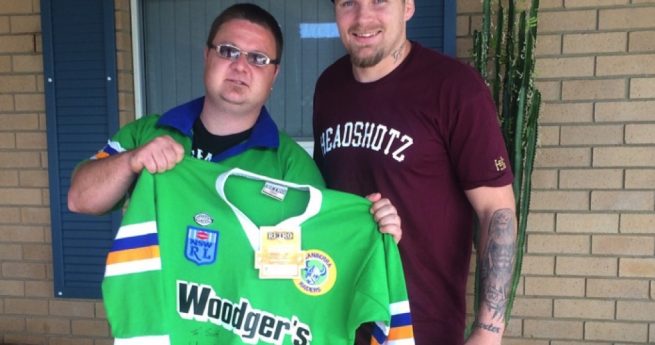 When lifelong Raiders fan Scott Gliddon awoke to see flames coming from a van parked in a shared carport earlier this month he knew he was in trouble, with the inferno quickly spreading into the roof and into his house in Western Sydney.

After getting through the initial shock of what had just happened, he came to the realisation that he’d not only lost part of his house but also his prized collection of Raiders memorabilia from a lifetime of supporting the club.

“I couldn’t believe what was going on,” Scott Gliddon said. “One minute there was a fire and the next thing the whole place was in chaos. It was only after the blaze was under control did I realise the full extent of the damage and the fact I’d lost all of my prized Raiders gear.”

In the days following the fire the Raiders reached out to Scott to offer some support and to let him know the club was thinking of him during what must be a tough time.

Raiders Coach Ricky Stuart in particular was touched by the situation and wrote him a personal message on a replica of the Raiders 1994 premiership winning jersey and offered him the opportunity to come and meet the team during a Sydney match in 2016.

Raider’s legend and current NSW Origin Coach Laurie Daley was also touched by Scott’s story and the club organised Daley to write a personalised message for Scott on a replica of the clubs 1989 premiership winning jersey.

The jerseys were hand delivered by Blake Austin, who when hearing about Scott’s situation offered to pay him a visit.

“Scott’s story was really tough to hear and I thought I’d try and pick his spirits up by dropping by and spending some time with him,” Austin said. “He was really appreciative and was in tears when I gave him the jerseys. The club also organised a membership for him for the 2016 season and that probably made him more excited than anything else.

“To see what the club does for its fans is a huge and I’m just glad I could be part of making a Raiders fan that has been through a lot feel a bit better.”

Scott was absolutely stunned to receive the jerseys and the visit from Austin, and said a lifelong fans commitment to the club would only be stronger from now on.

“To get two jerseys from the club was huge, but to have them signed with personal messages from Ricky Stuart and Laurie Daley was amazing and something I’ll never ever forget,” he said. “Then to have them delivered by Blake Austin was simply overwhelming and he’s won me for life after this.

“The club didn’t have to do any of this and I can’t thank them enough. To become a member of the Raiders is a something I’ve always wanted and I can let them know I’ll never forget what they’ve done for me.”