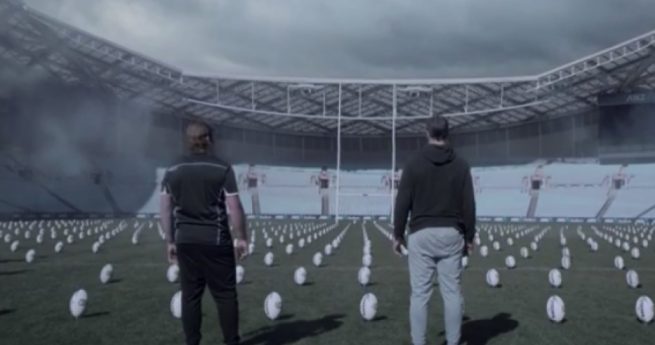 Rugby League Players have united for the ‘NRL Kick Bowel Cancer’ campaign with the aim of helping to save thousands of lives.

The NRL will encourage Australians to take a simple 60-second bowel cancer detection survey that could save a life.

Now in its second year, the NRLs partnership with Bowel Cancer Australia, The Gut Foundation and Cancer Council NSW will run throughout  2015.

Every year, 15,000 cases are detected and 4000 people die from the disease but if detected early 90 percent of bowel cancers can be treated  successfully.

All fans attending tonight’s game between the Roosters and Wests Tigers will be given a “NRL Kick Bowel Cancer” placard.

NRL Head of Community Adam Check said the NRL’s target was to see an additional 15,000 people take the test this year.

He said a team of ambassadors, headed by Alan Tongue and Chris Heighington, had thrown their support behind the campaign after feeling the impact of the disease through family members.

“We will be able to measure the success of this campaign by how many people take the test – and catch the disease when it can be treated,” Mr Check said.

“The best part is that those people will go on to live normal lives – simply because they took 60 seconds to take the test.”

Former Raiders star, Alan Tongue said his family was touched by bowel cancer when his Nan passed away in 2007.

“If we can raise the awareness of bowel cancer and create the conversation for people to take the test, the more likely people will be saved,” he said.

Tongue and Heighington have been joined by Josh Perry, Adam MacDougall, David Shillington, Mario Fenech and James Tedesco in a television commercial to support the cause and raise awareness of bowel cancer in Australia.

In addition to the television commercial, the NRL has set up a website that hosts a bowel cancer risk assessment survey along with tips and information from partners, The Gut Foundation, Cancer Council NSW and Bowel Cancer Australia.

Players take on State on