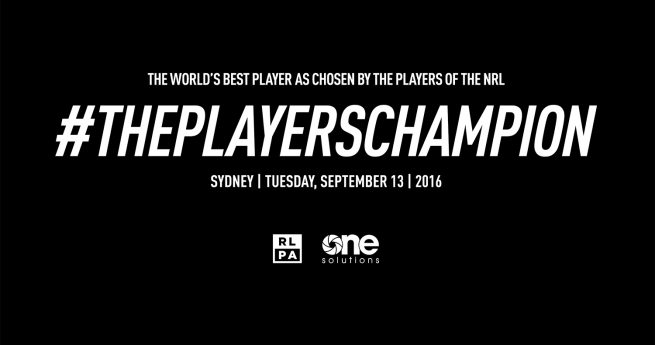 The Rugby League Players Association has today launched its new annual awards night, the Players’ Champion, to be held at Marquee at The Star on Tuesday, September 13.

The Players’ Champion will celebrate the world’s best Rugby League Player, as voted by the Players of the NRL.

The awards night, to be hosted by Channel 9’s Karl Stefanovic, will also recognise the performances of Players, on and off-field, across all areas of the game.

For the first time, a number of the awards will be presented on the ‘black carpet’ in front of fans, who are invited to attend the event and meet their favourite Players in the fan zone, while being entertained by internationally-renowned DJs, the Stafford Brothers.

“We wanted to reimagine our awards ceremony and elevate the event in a way that better reflects the esteem in which Players hold these awards,” RLPA CEO, Ian Prendergast, said.

“We are excited about delivering a night that our members can enjoy with their peers, as well as providing a live entertainment area for fans, and engaging content to showcase the event.”

“The fans play a critically important role in the lives of Rugby League Players, and this is a great way to include their support in our awards night.”

“The Players’ Champion is nominated from the Players’ votes from each game throughout the season, making it a true peer-voted award.”

“In my eyes, the Players’ Champion is the highest accolade a player can get, it’s such an honour to be voted by your peers as the best in the game,” Thurston said.

The Jillaroos and Kiwi Ferns will also be celebrated and presented with awards at the Players’ Champion awards night.

The NRL’s Wellbeing and Education awards will also form part of the evening, with academic, Indigenous, Pasifika, wellbeing and education awards presented to Players who have excelled this year and been positive role models within their local communities.

Thanks to our corporate supporters of #THEPLAYERSCHAMPION