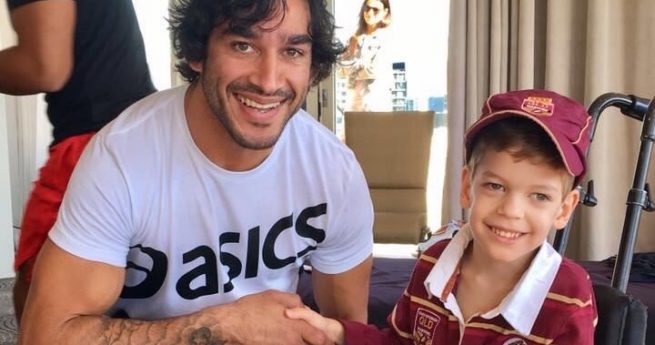 The positive impact that Rugby League players have on the community often goes unrecognised or receives very little coverage in the media.

This was the case on Tuesday when the Queensland side assembled in camp ahead of the opening State of Origin match. What slipped under the radar was that every player in the squad spent time with a young boy named Lachlan de Ryck.

Lachlan has an incredible and truly inspiring story. The five-year-old from Manly West in Brisbane, along with his father Nigel, were invited into the Maroons camp through family friends Stephanie Langdon and Michael Scanlan from Intrust Super who contacted QRL’s Joe McDermott.

A Maroons, North Queensland and Johnathan Thurston fanatic, Lachlan loves his footy as much anyone.

He has also been faced with a number of challenges.

Lachlan was born at 27 weeks gestation (3 months premature) weighing 1228 grams. Within 36 hours of being born, he suffered a brain bleed causing a brain injury that resulted in his cerebral palsy condition.

This impacts his gross and fine motor control, meaning he has been in a wheelchair since outgrowing his pram.

Lachlan was also diagnosed with Chronic Lung Disease, which required him to be attached to oxygen lines for the most part of 12 months.

He has also had a range of other surgeries and treatments, including three rounds of botox injections to attempt to release the spasticity in his legs and a strabismus eye operation to straighten his eyes.

Despite all of this, Lachlan is extremely bright and happy.

That happiness turned to overwhelming excitement on Tuesday when he got the chance to meet his hero Thurston and the rest of the Queensland team.

Lachlan’s mother, Victoria, said the experience was one he will cherish for the rest of his life.

“No words can describe what this meant to Lachlan,” Mrs De Ryck said. “We are forever grateful to all that made it happen and for the wonderful players – (they are) great gentlemen and role models!

“The players gave Lachlan their genuine undivided attention – even Wally (Lewis) went over and spoke to Lachlan and Nigel as they left the hotel.

“The players do so many great things for the community and I’m sure a lot goes unrecognised.”

The Queensland players were just as excited to meet Lachlan, with the team now focussed on preparing for Wednesday night’s opening game of the State of Origin series against the Blues.

RLPA supports the ACA and its...