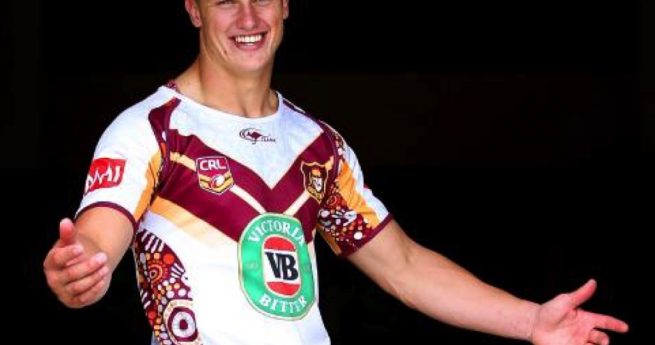 Created by 2015 NAIDOC Artist of the Year, Darren Dunn, the jersey celebrates the contribution that Indigenous people have made to Rugby League in Regional NSW and features a unique design inspired by Gamilaroi culture.

“This jersey has been designed to acknowledge the tremendous contribution that Indigenous people make to Rugby League, not only at NRL level but right throughout Country Rugby League’s competitions,” said Quinn.

“Some of the game’s greatest Indigenous players including Laurie Daley, Ricky Walford, Preston Campbell, Nathan Blacklock and many others started their careers in Country Rugby League and went on to represent Country Origin and we’re proud to acknowledge their efforts with this design.”

“Rugby League plays a significant role in Indigenous communities and having the Country Origin team acknowledging Indigenous culture is a great initiative and sign of respect from Country Rugby League,” said Walford.

The jerseys unique design pays homage to the Gamilaroi nation, which encompasses Tamworth, where this year’s AAMI Country v City Origin clash will be played at Scully Park Regional Sporting Precinct on May 8th.

The shorts will also feature the ‘RECOGNISE’ logo in a show of support for the campaign which aims to recognise Aboriginal and Torres Strait Islander peoples in the Australian Constitution and ensure there is no place in it for racial discrimination.

Explanation of the Country Origin Indigenous jersey design: From the artist, Darren Dunn.

There are two main aspects that feature in the jersey which are the traditional river systems and the animal totem of the local area which is the Kangaroo or ‘Bandaar’ as it is known in local dialect.

The two kangaroos on the front of the jersey represent the gathering of Indigenous and Non-Indigenous people in a ceremony of respect and harmony.

The side panels represent the ‘shake a leg’ which is a traditional welcome dance of the local people. The hands represent Indigenous and Non-Indigenous people coming together as one nation.

The back of the jersey features three Kangaroos which pay respect to our past, present and future elders. The white, red and yellow dots are the body ochres which were, and still are, worn today in ceremonial dance corrobborees around the Gamilaroi nation – Darren Dunn.

Tickets for the 2016 AAMI Country v City Origin clash are now on sale via ticketek and Wests Leagues Club Tamworth.