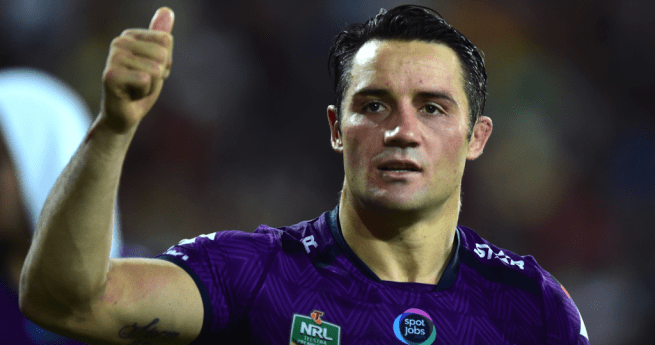 Cooper Cronk will become just the 11th player to play 300 NRL games for a single Club when he lines up for Melbourne Storm in the Preliminary Final this weekend against the Canberra Raiders at AAMI Park.

The champion halfback joins his skipper Cameron Smith as the two Melbourne players to reach the milestone, becoming just the 25th player to join the game’s decorated 300 Club.

It is an achievement that will see him sit alongside rugby league’s all-time greats including Darren Lockyer, Steve Menzies and Terry Lamb.

In a remarkable stat, Saturday night’s game will be the first time in NRL history two 300-gamers have appeared in the same team, with Cronk and Smith to share this milestone in front of their home crowd.

The ultimate professional, Cronk’s supreme work ethic has seen him become one of the greatest playmakers of the modern era.

2013 Dally M Medallist, four-time Dally M Halfback of the Year, 2012 Clive Churchill Medallist, five-time Storm Best Back and Club life member, his list of achievements is among the best the game has seen.

He recently re-signed with Storm remain in Melbourne until at least the end of 2018, in a deal that will see him spend 15 years playing in the purple jersey.

Cronk has also made the No.7 jersey his own at representative level, playing 19 games for Queensland and 28 in the green and gold for Australia.

It is a remarkable journey for a player who came to Melbourne in 2003 as a 20-year-old in search of an opportunity.

The 32-year-old continues to get better with age, continuing his remarkable form in 2016. Cronk led the NRL this season with 23 try assists while scoring 11 tries of his own – just one shy of his career best.

A hallmark of Cronk’s career has been his ability to perform in the big moments. A born match-winner, he has stepped up time and again to win games off his own boot. Cronk has kicked 20 field goals in his Storm career, resulting in 19 wins.