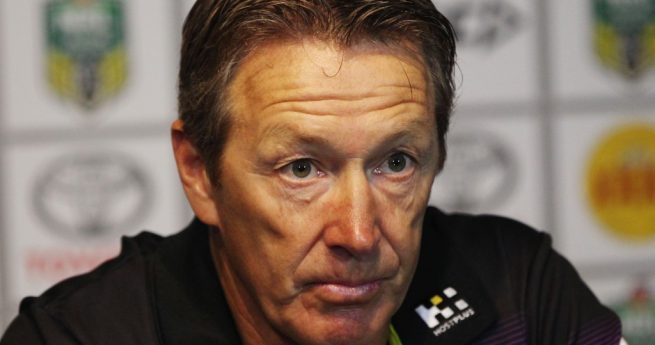 Craig Bellamy will continue his coaching career at Melbourne Storm until at least the end of 2018 after agreeing to terms with the Club.

Bellamy’s retention will see the legendary mentor take his association with Storm out to 16 NRL seasons.

The announcement was made by Storm Chairman Bart Campbell today and is set to provide a significant boost to the Club heading into Monday’s season-opener against St George Illawarra Dragons at AAMI Park.

In his 14 seasons in charge, Bellamy has an envious winning percentage of 66% from 341 matches, has led Storm into 12 finals campaigns in the past 13 seasons and five grand final appearances for three victories.

By the end of 2018, Bellamy will sit fourth for Most Games Coached in the NRL, behind only Wayne Bennett, Tim Sheens and Brian Smith.

Melbourne Storm Chairman Bart Campbell said: “We are delighted that Craig will continue as head coach.

“He is a proven innovator and a brilliant teacher of men and both the Club and Craig have a strong desire to build on past achievements.

“One of Craig’s greatest strengths has been his ability in ensuring the team continues to challenge for the premiership at the same time as introducing our young exciting talent to the side.

“We look forward to Craig continuing to lead the team for a further two seasons.”

Bellamy said it was important he took the time to make the right decision.

“I had a decision to make beyond 2016 and I was determined to make that before the start of the season.

“I really enjoyed last season and I also wanted to see how I went through this pre-season and our trial games before making my decision. My enthusiasm and enjoyment has certainly been there and I’m certain I’ve made the right decision.

“I’m excited with the current playing roster and our future prospects, in 2015 we had some new guys come into the squad, these players will keep improving and I believe we have a good future at the Club.”

Head to the Storm website for all the latest news from the team.