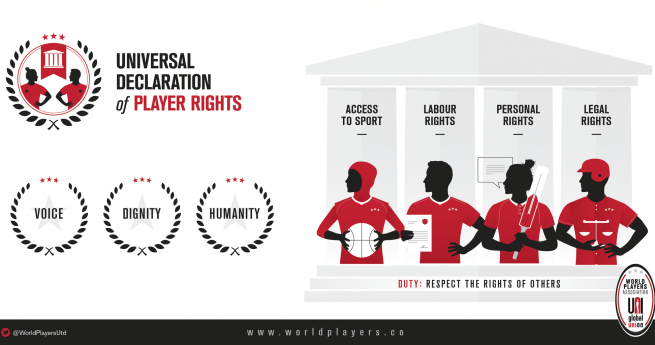 (Washington, D.C.) Today, the world’s leading player associations unveiled the Universal Declaration of Player Rights (the Declaration) to protect players from ongoing and systemic human rights violations in global sport. The Declaration, the first comprehensive articulation of athletes’ rights, sets a benchmark for international sporting organisations to meet their obligations to protect, respect and guarantee the fundamental rights of players.

“The rule books of world sport impose thousands of pages of onerous obligations, but none clearly spell out the internationally recognised human rights of athletes,” said Brendan Schwab, Executive Director of the World Players Association. “The result is an unjust system of sports law that lacks legitimacy and fails to protect the very people who sit at the heart of sport. We are making it clear that athlete rights can no longer be ignored. They must be able to quickly access justice.”

The implementation of the principles set out in the Declaration will introduce long overdue reforms to the governance of sport. Some examples include:

“Players are people first and therefore must be accorded the same rights as any other person or worker. We will not accept that international sporting bodies and powerful employers impose their will on the very athletes that generate sport’s enormous wealth,” said DeMaurice Smith, Executive Director of the NFL Players Association and Executive Committee member of the World Players Association.

The Declaration was developed over the last two years by the more than 100 player associations affiliated to World Players. It has also undergone a thorough review process by human and labour rights experts. It reflects generations of organised players’ experiences and incorporates recent feedback from thousands of players provided through wide-ranging surveys conducted by player associations.

The World Players Association’s mission is to embed the fundamental human rights in world sport. The Declaration builds on the UNGPs which have been adopted already by major sporting bodies such as the IOC, FIFA, UEFA and the Commonwealth Games Federation following sustained advocacy by the Sport and Rights Alliance (SRA), of which the World Players Association is a committed partner.

“Athletes’ rights are human rights. We shouldn’t even have to say it, but players are workers and all too often face abuse and discrimination,” said Minky Worden, Director of Global Initiatives at Human Rights Watch, which is a member of the SRA.  “This declaration of players’ rights is a timely reminder that many athletes start their careers as children and some have to fight for the right to play. All players have a right to freely express their political views, and to fair working conditions and pay.”

“World Players is committed to embedding the human rights of everyone in the delivery of sport. It is encouraging to see that governing bodies are now moving towards this same commitment, and we believe that the fundamental rights of players stated in the document cannot be excluded from this process,” said Jonas Bär-Hoffmann, Director Policy and Strategic Relations of FIFPro, the world soccer players’ union.

The World Players Association is the exclusive global voice of organised players and athletes across professional sport. It brings together 85,000 players through more than 100 player associations in over 60 countries. Its role is to ensure that the voice of organised players is heard at the highest levels in the decision-making of international sport.