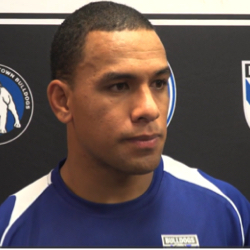 The Canterbury-Bankstown Bulldogs can announce the signing of Will Hopoate, for two seasons, through until the end of 2017.

Hopoate joins the club from the Parramatta Eels, where he spent the last two seasons, playing 38 games, scoring seven tries.

Since making his debut in Round 13 of season 2010 for the Manly Sea-Eagles, the Manly Cove junior has gone on to play a total of 60 games, scoring 21 tries.

The 23-year-old has also represented NSW on five occasions and has worn the City Origin jersey twice.

Chief Executive Raelene Castle is pleased to have a player of Hopoate’s calibre join the club.

“Will is an exciting young player who has already achieved so much in the game,” Castle said.

“Will will be a valuable and experienced acquisition for the Canterbury-Bankstown Bulldogs and I look forward to him joining the club.” Coach Des Hasler added.