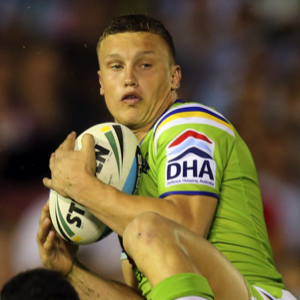 Raiders star fullback Jack Wighton has announced today that he will remain with the Raiders, after signing a new deal with the club until the end of the 2018 season.

The Orange CYMS junior has developed into one of the Raiders marquee players, with his transition to fullback in 2015 showcasing his wonderful talent.

An excited Wighton said he’d always wanted to make sure that he re-signed with the Raiders and looked forward to a successful three seasons with the club as they build their way towards something special.

“We’ve got a great squad here and I know if we keep working hard we can have plenty of success over the next few years,” Wighton said.  “I always wanted to stay at the Raiders, they’ve been nothing but supportive of me since I started my time here in the junior teams and I want to repay their belief in me with some good footy.”

Wighton said the shift to fullback had been great for his game and he hoped to continue to learn more and become a better player.

“It took me a while to find my feet playing fullback, but after a year there I feel like I’ve found a home and I can’t wait to start the new season,” he said. “Ricky has been great for my development as a player and I really love the squad we have here at the moment. It’s a great bunch of blokes and we’re all working hard for each other.”

Raiders Coach Ricky Stuart said the re-signing of Wighton was a major step forward for the Raiders and he hoped he could become a long term player.

“It’s very important because Jack’s a big part of our plan moving forward,” Stuart said. “Jack’s one of the favourites amongst the boys, he’s a very young NRL player who’s played around 70 games and a he’s a guy who could play 200-250 games here.”

Stuart once again applauded the way the squad had returned to pre-season training and noted Wighton was among the players who had impressed him early on in the pre-season.

“The important part to point out is the way the players have returned from the off-season break. The way they’ve looked after themselves and the attitude that they’re displaying is so comforting for me as a coach,” Stuart said. “They’re very enthusiastic and they know we are building something special here, and Jack sees that and is a big part of it going forward.”

Stuart said Wighton was settled and at home in Canberra, which made his re-signing a relatively seamless process for the club.

“When your players are happy you’re always confident they’ll re-sign and Jack’s happy now he’s found a position (fullback) to concentrate on and he’s happy within himself in regards to his football,” Stuart said. “He’s going to be a representative player at some stage. He’s also comfortable off the field and that’s very important.”