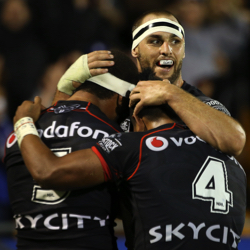 The Auckland-based Vodafone Warriors will play in five other cities around New Zealand in the same season, more than any other side in the club’s history.

Apart from the historic New Plymouth home game announced on Monday, the release of the full draw has revealed the Vodafone Warriors will play away games in Wellington and Christchurch on top of trials already set for Nelson – another first – and Whangarei.

In the space of six weeks the Vodafone Warriors will be front and centre of an NRL roadshow taking in Wellington’s Westpac Stadium on April 16 (Canterbury-Bankstown), AMI Park in Christchurch on May 14 (Penrith) and New Plymouth’s Yarrow Stadium on May 21 (Canberra).

The Wellington and Christchurch trips will be split by the return of the traditional Anzac Day clash against the Storm in Melbourne and a home game against St George Illawarra at Mount Smart Stadium.

“We’re obviously pleased about taking the very first NRL match to New Plymouth while visiting the South Island twice in the same season is also a breakthrough. We’ve never been to Nelson before and it’s the first time since 2010 that we’ve been to Christchurch.

“It’s a great opportunity for fans from around the country to see the Vodafone Warriors and also for our members to travel to those cities to support their team. We’re really looking forward to it.”

With 11 games again scheduled for Mount Smart Stadium, the Vodafone Warriors will play 14 of their regular season matches in New Zealand.

“It’s a big positive for our members and fans and also for the players having those extra games not just at home but in so many different places around the country,” said head coach Andrew McFadden.

“Certainly it will help with our preparation and our routines knowing we won’t travel as much as we usually do. It’s a boost as well for the team being able to play more games in front of our own supporters.”

With games being played in Wellington, Christchurch and New Plymouth, Doyle urged Vodafone Warriors supporters in those regions to take advantage of the club’s Warrior Proud membership. Among the benefits of the low-priced $59 membership is a ticket to any of the Vodafone Warriors’ games in New Zealand.

“It’s perfect for people in those regions who can’t make it to Auckland but would love to go to one of our games,” he said.

Apart from the games scheduled around New Zealand, McFadden welcomed the finish to the regular season which has given the Vodafone Warriors a rare home game, in fact two on end; they meet Wests Tigers and then the Parramatta Eels in the final two rounds after last having a season-ending home match in 2012.

“We still have two away games to start and taking on the Broncos in round two on a Friday night at Suncorp Stadium will be a huge challenge but that’s balanced by being at home for the last two rounds,” he said.

“Another plus is having the Rabbitohs at Mount Smart Stadium after playing them in Perth the last three times.

“The draw is what it is when it comes down to it. It doesn’t change the fact we will need to be the best we can be each and every week.”

After starting with the Tigers and then the Broncos, the Vodafone Warriors open their home campaign with a blockbuster against the Storm and meet again in Melbourne five weeks later.

In the first nine rounds they meet six of 2015’s finals sides (Melbourne twice) and will host six of them during the season – the Melbourne, Manly, St George Illawarra, Brisbane, the Roosters and South Sydney.

The clubs the Vodafone Warriors will face once in 2016 are the Bulldogs in Wellington in the seventh-round, St George Illawarra in Auckland in round nine, Cronulla at Remondis Stadium in the 16th round, the Rabbitohs at Mount Smart Stadium in round 23, the North Queensland Cowboys in Townsville in round 24 and Parramatta in the last regular season home game in round 26.

Of the 10 games the Vodafone Warriors play in Australia one will again involve the NRL’s longest away trip to Perth where they’ll play Manly on July 16. The other nine games will take them to Sydney four times, Brisbane, Newcastle, Canberra, Robina and Townsville.

Visit the Warriors website for more details and membership options.