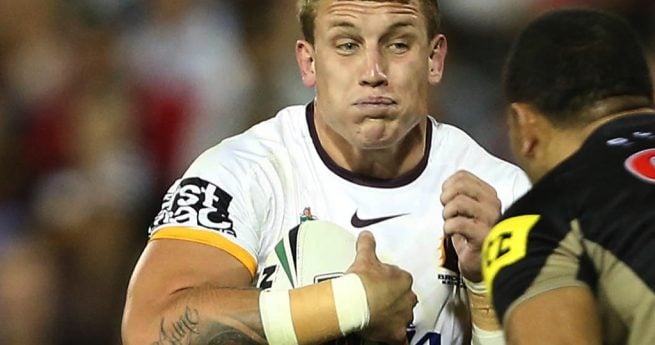 Wallace, who turns 25 on Saturday, will be reunited with Titans in-form fellow prop Ryan James who he played S G Ball (under-18s) with in 2009 and National Youth League under-20s in 2010 as a Titan.

The former Runaway Bay junior, who moved to Sawtell in NSW when aged 13, says he is looking forward to returning to the Gold Coast where many of his family still live.

“It’s exciting being able to head back to the Gold Coast where I still have a lot of family and join a club that is really on the rise,” Wallace said today.

“I still know a few of the guys there and have kept in contact with Ryan James who is having a great season; it will be good to be reunited with him.

“But first I want to finish the season strongly with the Broncos who gave me a start in the NRL and have helped me develop my game and taught me a lot about the professionalism needed at that level.

“However, I see this as an opportunity to hopefully establish myself in the NRL and go back to where my junior career began.”

Wallace has played all 17 games for the Broncos this season and 65 NRL matches since debuting in 2012.

“Jarrod played 25 games last season and hasn’t missed one in 2016 and in that time has really improved and developed as a player,” Henry said.

“He’ll provide further depth to a pack that has been consistent and competitive all season and is at the age where his best football as a prop is ahead of him.

“It’s great that he has shown faith in what we are developing at the Titans and I look forward to him playing a major role in that.”