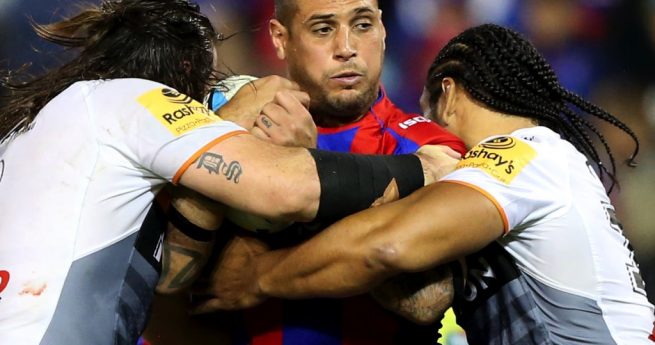 The Newcastle Knights has announced Jeremy Smith, Tariq Sims and Trent Hodkinson will joint-captain the Club in 2016.

Coach Nathan Brown believes appointing the trio is what suits the Club best at this time.

“They are three really good candidates, all at different stages of their career,” Brown said.

“Jeremy has been around for some time and has been under some great systems and great coaches,” Brown added.

“He understands what’s required not only to win, but how to win.

“He plays good, hard, tough but fair footy and knows how to win the small parts of the game.

“He can really help mentor our younger players.”

Tariq Sims enters his second season with the Knights, and has played a total of 90 NRL matches.

“Tariq has shown some outstanding leadership qualities and is an exceptional role model,” Brown said.

“He’s stepped up in the absence of a lot of players leaving the Club. He prepares very well and is prepared to challenge other players to do the right thing, which is a really important part of leadership.”

It is the first year at the Knights for Hodkinson but his impact has been immediate.

“Trent has valuable Origin experience, is very calm and well measured and can control the team on the field,” Brown said.

“He’s an Origin player and played in grand finals and is a good mentor for the younger players.”

Brown also describes the three players’ off-field records as impeccable and believes the trio will continue to contribute greatly to the wider community.

Sims, Smith and Hodkinson all have strong track records of dedicating themselves to important causes and possess a desire to help others.

“The way they are all held in the community is not going to be anything but in high esteem,” the coach said.

The three captains will form part of the leadership group alongside Tyler Randell, Robbie Rochow and Dane Gagai, with a collective aim to provide strong guidance for the Club’s developing players.

“All those players make up part of our leadership group, which is important for the Club moving forward,” Brown said.

“Tyler, Robbie and Dane still have a long way to go in their playing career but are showing good signs of leadership now.

Keep up to date with all the news on the Knights website.

Photo: Jeremy Smith is one of three Players sharing the Knights’ cpataincy in 2016 (nrlphotos.com)