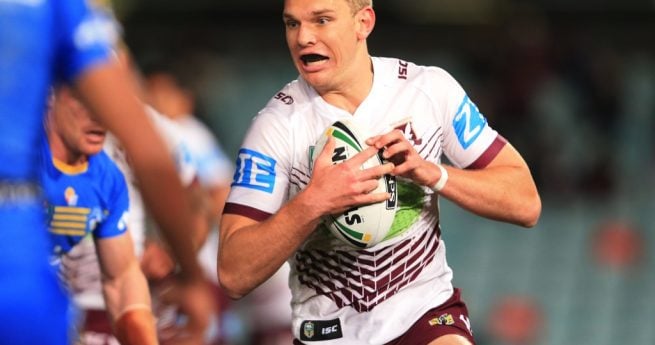 The Manly Warringah Sea Eagles have signed star brothers Jake and Tom Trbojevic until the end of the 2020 season.

Sea Eagles Head of Football Bob Fulton completed months of negotiations with the two players, their parents and management to secure the prized signings.

The dual signings of the Mona Vale Raiders juniors is seen as a major building block for the future of the Sea Eagles.

Head Coach Trent Barrett says the re-signing of the Trbojevic brothers until 2020 is a strong show of intent from the Sea Eagles.

“It’s extremely pleasing that we can continue to build the team around these two fine young players but also another number of youngsters in our squad. We hope to be able to keep the nucleus of this side together for years to come,” Barrett said.

Sea Eagles Chairman Scott Penn was thrilled with the commitment from Tom and Jake to sign long-term with the Club.

“The boys are already highly talented and are only going to get better and better.

“We see a great deal of similarities between Jake and Tom and the Stewart brothers at the same point in their careers, and we’re confident that we’re building for another era of success and regular Finals football,” Penn said.

New CEO Tim Cleary was ecstatic to see the two young men commit to the Club.

“I’ve been a Manly supporter for many years and it gives me great confidence coming to the Club knowing that we have young men of the calibre of Jake and Tom. I feel very confident and excited about the impact that I can have in supporting these two on and off the field,” Cleary said.

Both brothers were relieved that the tension of re-signing was now out of the way.

“We never wanted to go anywhere else. It was just a matter of the negotiations taking place, and Bob Fulton made it easy and was always available to answer any questions we may have had.

We are excited about the future of the Sea Eagles and want to be a part of it,” Jake said.

Tom echoed his thoughts and said he was keen to have a strong off-season and start his 2017 campaign injury free after a recent ankle operation.

Keep up to date with all the Sea Eagles news on the Club website.

Photo: Tom Trbojevic (pictured) and brother Jake will stay together at Manly. (nrlphotos.com)

Bromwich to lead Kiwis in Four...