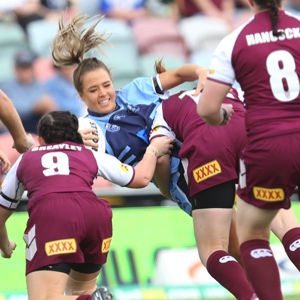 The Aquis Titans will help showcase the ever-emerging women’s rugby league in July when the Women’s Interstate Challenge match will be played as a preliminary game to our round 20 clash with Parramatta Eels on July 23 at Cbus Super Stadium.

It means the cross-border rivalry will extend for an extra 10 days after the men finish their series, with the best female rugby league players in Queensland and New South Wales going head to head.

Both teams will be looking to capitalise on the growing pathways, fan base and media exposure that women’s rugby league continues to attract.

Many of the Harvey Norman Jillaroos players who took on the Kiwi Ferns in the Test match in early May are likely to be on opposing teams, with New South Wales looking for their first win against Queensland in more than a decade.

One of them will be Heather Ballinger, Queensland’s 2015 representative player of the year and a stand-out performer in the Jillaroos’ 2013 World Cup victory.

The front-rower from the Souths club in the South-East Queensland competition (but originally from Longreach) said she was excited about the opportunity to play in front of an NRL crowd.

“The women’s league is growing massively and to be given this great opportunity to show off our skills and toughness ahead of a main NRL game between the Titans and Eels – the girls are pumped,” she said.

“We hope to display an entertaining game of rugby league in front of a wider audience at Cbus Super Stadium.

“As a Queenslander, the pride in pulling on the jersey is what the girls are most passionate about.

“Hearing the cheers and support when in front of our home fans when taking to the field sends shivers through the body; it is an experience never forgotten.

“It’s not only the fact of doing our state proud, it brings a whole new level of rugby league to the Queenslander girls.”

The Titans will shift our under-20s Holden Cup match to Pizzey Park to make way for the women’s interstate match.