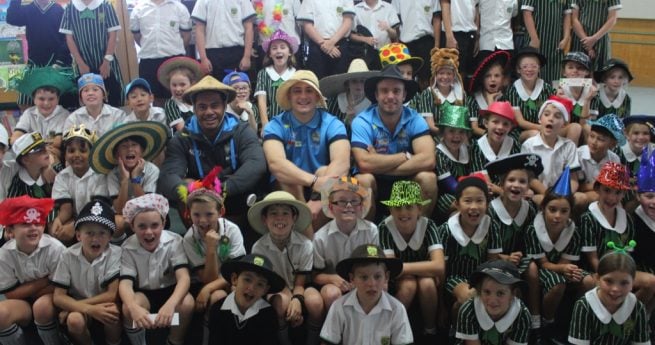 Students at schools, childcare centres and libraries across Australia – and Gold Coast Titans players – put on a hat and took part in a nationally conducted a simultaneous storytime today to foster a love of reading.

Organised by the Australian Library and Information Association (ALIA) to promote the importance of early childhood literacy, Australia’s book industry and the role of libraries, it is promoted as Australia’s biggest story telling session.

Yesterday we produced a video featuring our ‘reading captain’ Agnatius Paasi, along with teammates Josh Hoffman and Ash Taylor, reading this year’s book – I Got This Hat by Kate and Jol Temple.

The video was sent to 3100 schools and libraries registered for NSS (National Simultaneous Storytime) across the nation.

It was the only such video to promote the program produced by any sporting team or code video. Many of the schools, as far away as Perth, watched our video.

National Simultaneous Storytime is now in its 16th successful year as a colourful, vibrant, fun event.

“Each year there are some special events where the book is enjoyed with celebrity readers and we are thrilled the NRL joins us as a partner again so that footy stars read the book aloud at local events.

“We knew that schools, families and storytelling circles would have a lot of fun with this story, children respond to the illustrations of the hats and think about which one they like best.

“The book is fantastic at inspiring imaginations and that’s why it’s such a powerful choice for NSS because this event is all about encouraging a passion for books and the magical art of storytelling.”

HarperCollins is the official partner of the 2016 National Simultaneous Storytime and generously made available the teacher’s notes for the book.

Agnatius Paasi, along with teammates Josh Hoffman and Ash Taylor, reading this year’s book – I Got This Hat by Kate and Jol Temple.

Chee Kam adds another year to...