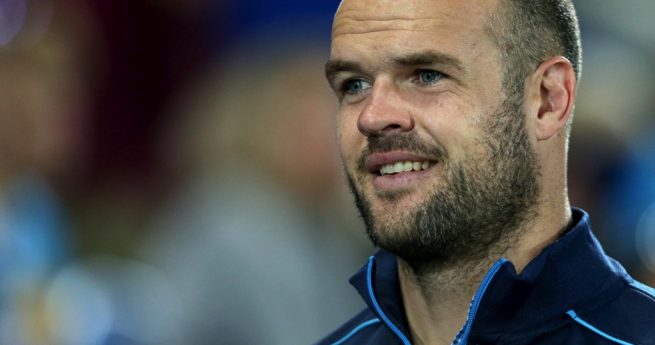 Aquis Titans players will be wearing lime green laces against the lime Green Machine of Canberra at Cbus Super Stadium this Sunday to support a cause close to the heart of skipper Nate Myles – lymphoma cancer.

Myles has been by the side of his wife and actress Tessa James’while she has fought the disease after she was diagnosed with Hodgkin lymphoma last year. Tessa’s father, former AFL player Steve James, has also been battling non-Hodkins lymphoma.

That’s why Nate is fully supportive of initiatives to help raise awareness and much needed funds for research for the cancer – and was taken by the story of Hamish O’Brien who lost his life in April at just 12 months old to Birkitt’s Lymphoma.

He has jumped behind this Sunday’s Legs Out for Lymphoma fun day at Mudgeeraba on the Gold Coast, being held in support of Lymphoma Australia and in memory Hamish.

Nate will donate the boots he wears in Sunday’s clash with the Raiders and a signed Titans jersey to fund-raising efforts and as part of the celebration of Legs Out for Lymphoma Day nationally, while several Titans players will wear lime green boot laces against the Green Machine – signifying the colour used to identify lymphoma awareness.

The Legs Out for Lymphoma fun day will be held at Firth Park, Mudgeeraba at 11am on Sunday, with a barbeque, face painting, a walk and other activities. Nate and some teammates will drop in on his way on their way to the Titans’ clash against the Raiders at Cbus Super Stadium.

Titans fans can park their cars at Firth Park and enjoy the free shuttle bus service to and from Cbus Super Stadium, so they can help a good cause and then help, hopefully, the Titans beat the Raiders.

Nate came across Hamish’s story through former Titans teammate and current business development manager Luke O’Dwyer, who lost his brother Ryan to leukaemia at age 12 in 1998.

Nate and Luke became aware of their ordeal through the nurse that assisted Ryan and they have tried to add comfort and support since.

Nate met Hamish in the last weeks of his life when his parents Damien O’Brien and Natasha Manson visited the Titans dressing room with Hamish.

“It’s a hidden cancer although it’s the most common cancer in Australia, and I have watched its effect first hand,” Myles said.

“I’m more than happy to help bring awareness to it, considering Tessa’s experience and having met Hamish and his beautiful parents Natasha and Damien.

“Sometimes something sad like this can at least allow you to meet wonderful people and try make something positive out of a negative and that’s what Sunday is all about.”

Natasha said it was “absolutely amazing” how Nate, Tessa and the Titans had jumped behind the Legs for Lymphoma day and taken Hamish’s story to their hearts.

“We knew little about lymphoma before we found Hamish had contracted Birkitt’s Lymphoma at six months old,” Natasha said.

“Damien and I have done what we can to get lymphoma out there but to have Nate and Tessa aboard is our way of getting the word even more out in the community.

“Lymphoma cancer is widely out there in our community but few people know about it, and we knew nothing about it until Hamish was diagnosed.”

Natasha and Damien were made aware of Hamish’s situation only after he began losing weight despite him eating well, and having some laboured breathing.They want to make people become aware of the possible warning signs.

“If a gland is just slightly swollen, you have night sweats, whatever it is, go and check about it. Anything that is not normal, check it out with your doctor,” she said.

“I feel I have to do what I can now in memory of Hamish to help increase awareness.”

People who can attend Sunday’s walk and fun day are encouraged to wear green.

For more information or to learn how to donate, visit the website.