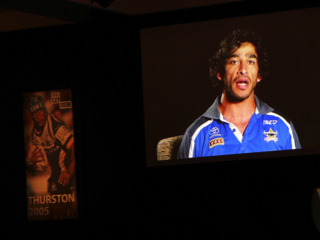 A strong finish to the season saw Thurston, who claimed the accolade in 2005 and 2013, retain the title ahead of 2009 Medalist Jarryd Hayne, Anthony Milford, Jesse Bromwich and Gareth Widdop who were all finalists for the Award that is determined by votes lodged by Players after each game of the NRL regular season.

“I pride myself on the way that I play so to be able to accept this award is truly humbling,” said Thurston who sent a video message from Townsville where he is preparing with the Cowboys team for this weekend’s semi final game.

“In my eyes there is no higher honour in the game (than) to be voted one of the best by your peers,” said Thurston. “So I thank you for that.”

Earlier in the night Thurston was named the One Solutions Australian Representative Player of the Year for his performances across World Cup, Test and Origin competition.

“It was a privilege to be nominated but to actually receive this is truly humbling,” said Thurston. “It’s a highly contested award and there’s a lot of great players out there in the representative arena.

“I’d like to thank those who voted,” he said. “It’s no doubt an honour I will cherish for many years to come.”

Shaun Johnson was named One Solutions New Zealand Representative Player of the Year.

“It’s a massive honour to receive this award,” said Johnson in a video message. “To even be considered amongst players like Roger and Dean is pretty special.”

Anthony Milford accepted the inaugural One Solutions Rest of the World Representative Player of the Year for his performances with Samoa.

In 2013 Luke Brooks was nominated in the National Youth Competition (NYC) category but this year the Wests Tigers halfback stepped up to win the RLPA Rookie of the Year Award.

Sione Mata’utia from the Newcastle Knights was named National Youth Competition Player of the Year.

Eleven Kangaroo and Kiwi Players were recognised with the RLPA Chairman’s Award to mark their Representative debuts for Australia and New Zealand respectively.

The prestigious RLPA Dennis Tutty Award was presented to Nate Myles (Gold Coast Titans) by the man in whose honour the Award was named.

“We were thrilled to have Dennis Tutty join us tonight, not least because of his significant contribution to the rights Rugby League Players enjoy today,” said RLPA CEO David Garnsey.  “Nate (Myles) continues the tradition of leadership both on the field and off and has taken an active role at the Titans, and more widely, in promoting player rights and in engaging others in the debate about issues of concern to all Players.”

New South Wales Players Luke Bailey (Gold Coast Titans), Greg Bird (Gold Coast Titans) and Steve Menzies (retired) along with Queensland’s Trevor Gillmeister (retired) were inducted into the RLPA Origin Gold Club presented by Seiko in recognition of having made at least 15 appearances for their State.

Below is the list of winners of the 2014 RLPA Players’ Award recipients:

Host of champions in line for...