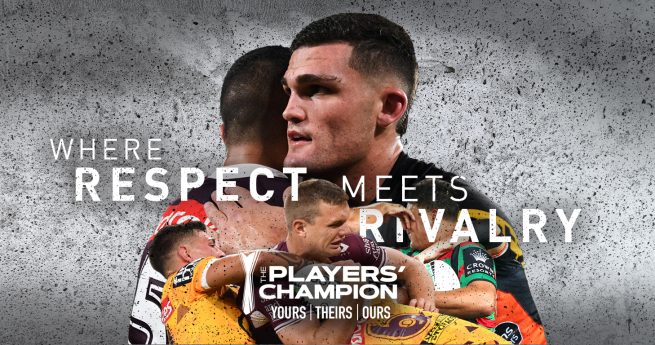 The Rugby League Players’ Association is pleased to announce the launch of The Players’ Champion 2021 award campaign, Where Respect Meets Rivalry.

Despite another season of adversity for Rugby League, our players’ have demonstrated that their sense of unity has never been as strong as it is now. The relocation of players, staff and their respective families has paved the way for a season of triumph and celebration.

Reflecting on the sacrifice of the playing group, RLPA CEO Clint Newton said:  “Like the rest of Australia, the last twelve months has again been a dynamic and challenging period. The sacrifices of Players and many others connected to the game have been necessary given their impact on fans, clubs, and each other, but they are not forgotten. We have witnessed players continually do their best even though the demands have repeatedly increased with players continuing to support each other throughout the season”.

The peer-nominated honour will again recognise the best players from the NRL- as voted by those who take the field each week. Alongside The Players’ Champion award will be The Players’ Rookie of the Year, The Players’ Dream Team and The Dennis Tutty Award.

A six-week multichannel campaign will be produced and distributed in partnership with the Nine Network for the second year, culminating on the biggest day of the season as The Players’ Champion is crowned during Nine’s Live Grand Final Day broadcast.

“Having one of our major broadcast partners on board for the second year is a testament to the value they place on the players and their achievements. We cannot understate the support of Nine and their willingness to provide the players’ award with the recognition it deserves,” said Newton.

In addition to the continuation of the theme Yours, Theirs, Ours, which encourages rugby league supporters to celebrate and embrace their players’ vote through the hashtag #OurChampion. This year’s award will draw upon the unique co-existence of intense rivalries and mutual respect within Rugby League, a sentiment that is at the very core of The Player’s Champion awards.

Speaking to the rivalry and respect and the award, Josh Hodgson said “Intense rivalries aren’t new to the sport, and they will always play a big part of what makes sport great. I love our game because no matter how intense the rivalry, there’s still great respect for each other’s ability. What someone can do on the field commands the respect of not only their teammates but opposition players. That’s what makes The Players’ Champion awards so great; players aren’t just voting for their teammates, they’re voting for the players they genuinely believe are the best, no matter what jersey they wear.”

RLPA PAG (Player Advisory Group) member James Tamou said “not only as a player but a fan of rugby league, I always look forward to the Players’ Champion award. There’s mutual respect around players, but to be voted the best from your opposing team is quite the accolade and honour.”