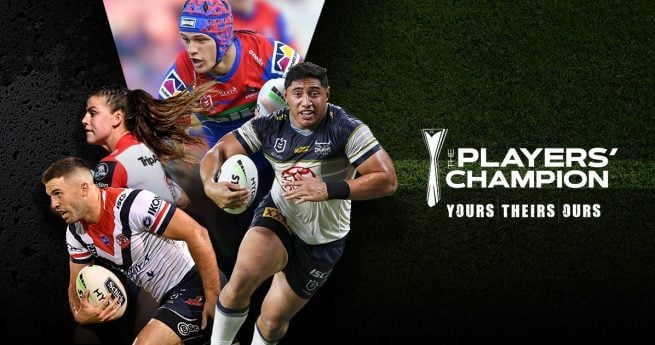 The Rugby League Players’ Association will crown their 2020 Players’ Champion on the biggest day of the season by partnering with Nine to deliver the announcement live on Grand Final day.

The peer-nominated honour will once again recognise the best players from both the NRL and NRLW seasons – as voted by those who take the field each week.

The theme of the digital content campaign to be rolled out on RLPA and Nine’s channels is Yours, Theirs, Ours – encouraging rugby league supporters to celebrate and embrace their players’ vote through the hashtag #OurChampion.

The NRL and NRLW awards will be presented in the lead-up to the NRL Grand Final on October 25.

“The Players’ Champion Award is one of the highest honours that a player in the NRL and NRLW can earn, it means a tremendous amount to be held in high regard by those you play alongside,” Thurston said.

“Receiving the award was one of the proudest accomplishments of my career, and I’m thankful that Nine will be able to give more exposure to this great initiative in the weeks to come.”

Nine’s Head of Rugby League, Simon Fordham, said it made sense to elevate an award held in such high regard by the players.

“We’re thrilled to partner with the RLPA to showcase this esteemed award on free-to-air television for the first time,” Fordham said.

“Since 2004, the Players’ Champion award has been one of the greatest honours an NRL player can receive, given it is decided by those who arguably know the game better than anyone – the players.

“We look forward to it being an integral part of Grand Final Day on Nine come October 25.”

“We are hugely excited by the advancement of our relationship by Nine providing the 2020 Grand Final broadcast as the platform to highlight the significance of this award.

“Our members have always held this award in high regard as the winners are chosen by their fellow players – but we also want to ensure all rugby league supporters recognise and celebrate the importance of this honour.

“While the 2020 season has certainly raised many challenges off the field for our members, they have continued to step up and accept significant responsibility while providing first class entertainment for fans and major partners.

“I’m sure this year’s Players’ Champion award will be strongly contested once again, with a number of standout performers taking centre stage.

“I’m also eager to see who will have a breakout year from the Women’s Premiership and join inaugural NRLW winner Jess Sergis on the honour roll.”

The digital campaign begins with the announcement of the List of Contenders from next week – the four nominated players from each NRL Club eligible for this year’s award.

Other awards to be announced as part of the digital campaign include The Dennis Tutty Award, the RLPA Rookie of the Year, the NRL-RLPA Wellbeing and Education awards and The Players’ 13 Dream Team.