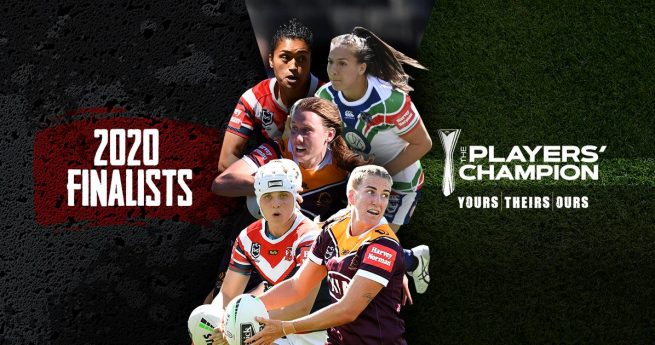 Ali Brigginshaw, Tamika Upton (Brisbane Broncos), Evania Pelite (Warriors), Hannah Southwell and Zahara Temara (Roosters) have been voted as the five best players for the 2020 season by their peers.

The winner of the prestigious award will be announced following the Roosters and Broncos NRLW Grand Final on Sunday – live on Nine’s exclusive broadcast from ANZ Stadium.

Brigginshaw, fresh off winning the Dally M medal on Monday night, will be looking to take home her first Players’ Champion honour this Sunday.

The Broncos halfback has enjoyed a stellar 2020 campaign – setting up two tries and scoring another on her way to a third consecutive Grand Final appearance.

The brilliance of Upton has been on full display with the Broncos fullback leading the competition for tries scored (four), while also notching up two try assists, 16 tackle breaks and six line-breaks in just three appearances.

Starting the 2020 season with a bang, Upton scored a first half hattrick in the Round 1 clash with the Warriors.

Topping the tackle breaks for the competition with 22 (six clear of the next best), Pelite crossed for three tries and four line-breaks, while establishing a formidable edge combination with Ellia Green.

Southwell, a multi-talented athlete, has definitely found her stride within the NRLW. She has been instrumental in leading the tricolours to this weekend’s decider – with the secondrower standing out in both victories over the Warriors and Dragons.

After being rested in Round 3, Southwell returns for the Grand Final clash with Brisbane.

Roosters’ teammate Temara rounds out the five finalists – with the playmaker turning in a strong 2020 campaign and will go head-to-head with fellow finalist Brigginshaw this weekend.

Temara earned player of the round honours in their Round 2 clash with the Warriors and will be out to emulate that performance against reigning champions Brisbane.

“The NRLW continues to go from strength to strength and this season has been nothing short of outstanding,” Newton said.

“ Recognising and celebrating the performances of our members each season is fundamental, and The Players’ Champion is a unique honour which is always closely contested.

“I’d like to congratulate Ali, Tamika, Evania, Hannah and Zahara on being voted among the best players by their peers this season – there is no greater honour.

“It’s an enormous achievement, and we look forward the announcement of the winner following what is sure to be a quality Grand Final between the Roosters and Broncos on Sunday.”