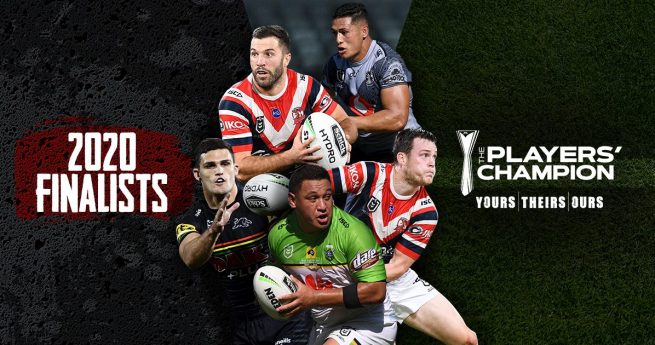 The Rugby League Players’ Association (RLPA) has today announced a star-studded list of finalists for The Players’ Champion (NRL) 2020.

NRL players from across the competition have voted Nathan Cleary, Luke Keary, Josh Papalii, James Tedesco and Roger Tuivasa-Sheck as the best five players for the 2020 season.

The winner of the prestigious award will be announced live on Nine’s coverage of the Grand Final on Sunday, October 25.

Panthers halfback Cleary has had a stellar 2020 season – leading his side to the minor premiership and just one win away from booking a place in the NRL Grand Final.

The other finalist set to take the field this weekend in the Preliminary Finals is Raiders’ prop Papalii, who is the only forward to feature on the list after an outstanding campaign for the Green Machine.

Amongst the five finalists are two Roosters’ superstars – Tedesco and Keary – who were both dominant throughout their premiership defence before bowing out to Canberra last weekend.

Tedesco will be looking to add a third Players’ Champion trophy to his cabinet, having already won the award in 2017 and 2019.

Rounding out the finalists is Warriors’ skipper Tuivasa-Sheck – with the sharp-footed fullback proving that you do not have to be in a top eight side to be considered amongst the best by your peers.

Tuivasa-Sheck made more running metres (3974m) than any other player in this year’s regular season, despite featuring in just 18 of the 20 games.

“To be recognised among the best five players in the competition by your peers is a significant achievement,” Newton said.

“We would like to congratulate Nathan, Luke, Josh, James and Roger on their outstanding performances this year.

“They have each played a key role in providing first-class entertainment for the wider community, despite encountering the most challenging of circumstances and conditions this season.

“All five finalists would be worthy winners of this year’s award and we look forward to the announcement being made live on Nine’s Grand Final broadcast.”

Finalists for The Players’ Champion – NRLW will be announced next Thursday following the conclusion of the regular season this weekend.