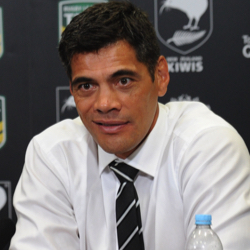 After dropping the opening encounter of the three-test series 26-12 to the home team, the world #1 team must defeat their rivals this week to keep their hopes for overall honours alive.

The Kiwis led 12-0 after 30 minutes of last week’s contest in Hull, but lost their momentum once Kearney began calling on his replacements.

This time round, the head coach has retained his starting line-up, but recalled veterans Lewis Brown and Alex Glenn for debutants Kodi Nikorima and Siosiua Taukeiaho on the bench.

“Both these guys we’re bringing in were a bit unlucky to miss out the week before and offer a great deal of experience,” admits Kearney. “Looking at last week’s game, that will be important for us this week.

“Lewis has done a great job for us in the past and Alex Glenn has had a wonderful year, so it’s just desserts for them.

“We’re in a position where we have to perform and these guys have done it for us before.”

The NZ Kiwis line-up for the second test against England at London’s Olympic Stadium, 2.30pm local time Saturday is: