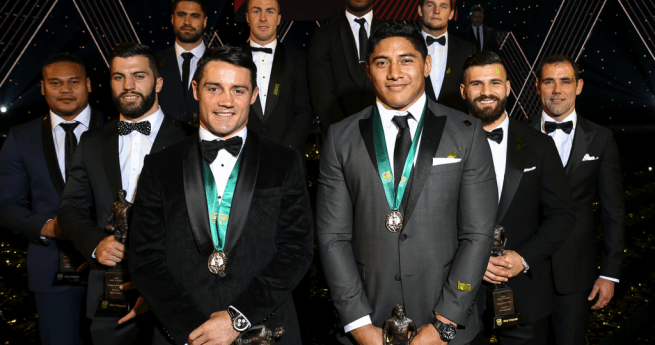 Just days out from an appearance in the 2016 Telstra Premiership Grand Final, Cronk was awarded his second Dally M medal, following his solo win in 2013, while Taumalolo, who earlier this month was voted by his NRL peers as the 2016 Players’ Champion, won his first Dally M medal.

Melbourne Storm and Canberra Raiders, who played off in a Preliminary Final on Saturday night, shared a significant amount of the honours on the night.

For the Storm, Cronk was named halfback of the year, Cameron Smith was awarded hooker of the year honours, and Jesse Bromwich was named prop of the year, while Smith also picked up the Representative Player of the Year award.

Canberra’s Jarrod Croker picked up three awards, including Captain of the Year and the Provan Summons People’s Choice.

Meanwhile the Raiders’ Ricky Stuart was named Coach of the Year, and Joseph Leilua was awarded Centre of the Year honours.

St George Illawarra’s Joel Thompson was awarded the Ken Stephen Medal for his commitment to making a difference in his community.

Kezie Apps continued a landmark year for the NSW women’s side by being named the Female Player of the Year.

Photo: The 2016 Dally M Team of the Year (Grant Trouville)