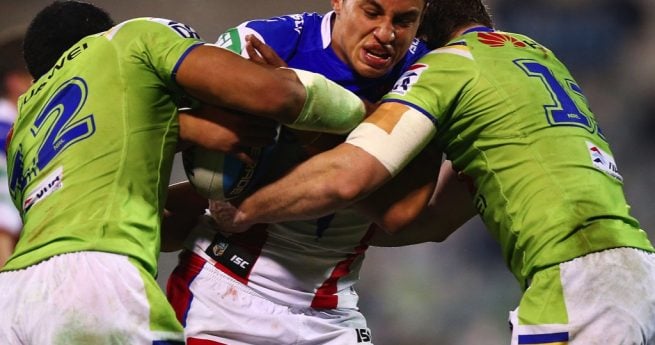 Tapine, 21, joined his new Raiders team mates at Raiders HQ for the first time today, after receiving a release from the final year of his contract with the Newcastle Knights earlier this week.

Tapine said he was ready to tackle the challenge of working his way into the Raiders NRL team and said he was impressed with what he saw in the Raiders trial match last weekend.

“I’m really excited to be here. It’s a new chapter in my life and I’m just looking forward to getting out there with the boys,” Tapine said. “I saw the team play last week and it’s a deadly team. I saw the skills and fitness and I’m looking forward to being a part of it.”

Tapine said he’s looking forward to working under the experience of Coach Ricky Stuart, while he said the transition would be made easier with the fact he had two former teammates at the Raiders.

“I’m definitely keen to work with Ricky. I’ve heard good things about him and I have a couple of mates who play here who have given him big raps,” he said.  “Adam Clydsdale is my former roommate and I’m good friends with Joey Leilua so it will be great for me to have some players I know well here.”

Tapine said he’s also excited about the chance to be in the home dressing room at GIO Stadium and playing in front of Raiders members and supporters.

“I remember coming down to play in Canberra and it’s a hard game, the members and fans always come out in force even on a cold day. I can’t wait to be a part of that.

Raiders CEO Don Furner said the signature of Tapine was exciting for the club and to secure his services this year was a huge bonus heading into the season.

“We’ve identified Joseph as a player we believe can be a really important part of our squad over the next few seasons and we’re looking forward to seeing him continue his development into a top class NRL Player,” he said. “We had originally signed him on a deal commencing in 2017, but circumstances have given us the opportunity to secure him this season and he’ll boost what we believe is a very strong squad.”

See the full interview with Tapine and catch up on all the Raiders news visit the team website.

Trio to captain Knights in...