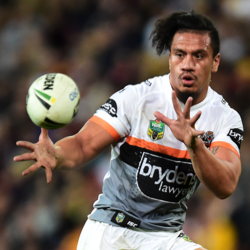 Wests Tigers have announced the re-signing of representative forward Sauaso Sue through to the end of the 2018 season.

The Samoan International has played 71 NRL games for the Club since making his debut in Round 6 of the 2013 season.

The 24-year-old played his junior football for the Macquarie Fields Hawks before joining Wests Tigers’ Under 20s, where he was part of the 2012 premiership-winning side.

The former Junior Kiwi representative has played eight Test matches for Samoa, including appearances in the 2013 World Cup and 2014 Four Nations tournament.

Sue expressed his excitement in remaining at the Club for a further two seasons.

“I’m very excited with my new deal,” Sue said. “I think that this team is going places and I’d love to be part of that.

“It’s a great opportunity for both me and my family to remain at the Club.

“The Club has changed a lot since my debut; those changes are good changes and I’m very happy to be here for another two years.

“The boys are awesome at the Club, we’ve got a great forward pack with guys like Aaron Woods, Tim Grant, Ava (Seumanufagai) and JJ (Felise) coming up.

“I’m focussed on bettering my game during the next two seasons and helping the younger guys coming up through the grades,” he said.

Wests Tigers CEO Justin Pascoe said he is pleased to have Sue re-commit to the Club until the end of the 2018 season.

“Sauaso’s re-signing is excellent news for the future of the Club,” Pascoe said. “He is an excellent ambassador of the Wests Tigers’ core values and we are delighted to have him commit his future here.

“Sauaso is one of our beyondblue ambassadors and shows great commitment to our community initiatives.

“He is a very passionate player on the field and we are really excited to have around the Club for a further two years,” he said.

Wests Tigers Head Coach Jason Taylor said Sue plays an important role in the team both on and off the field.

“We love the passion that Sauaso plays with,” Taylor said. “He is a very aggressive player; we love the way he carries the ball and his commitment defensively.

“We want all of our young forwards to follow in his footsteps with the way he has developed over the past couple of years.

“Sauaso is also developing his leadership skills, it’s something that he is really enjoying.

“We are really excited as a Club about the way he is developing in that area, because he is such a leader on the field with his actions.

“His experience at a young age is great, that’s why he is part of that leadership group and we are looking forward to seeing him keep improving as a player.

“When you think about the age that he is at, there is still a lot of improvement and we are very excited about the player he can become down the track,” he said.