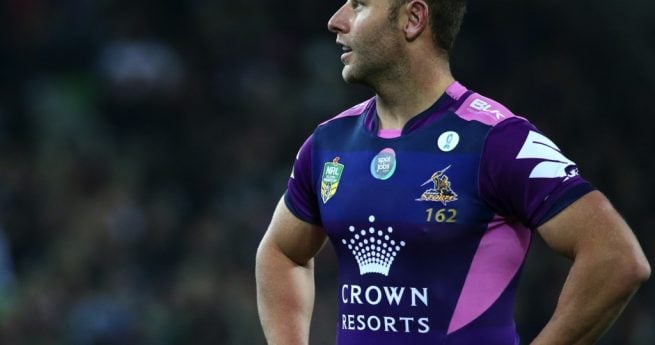 Melbourne Storm has announced a young and exciting squad to represent the Club at this weekend’s Auckland Nine’s competition.

The 18-man squad is made up of several experienced first-grade players and will also provide the Club’s younger talent with a chance to gain quality experience.

Blake Green will captain the team while assistant coach Adam O’Brien will take the tactical reins. Craig Bellamy will make the trip to Auckland to oversee the side’s performance.

Green, 29, will be the oldest member of the Storm’s Nines squad that boasts an average age of 22 years and four months.

The two-day pre-season carnival will provide many of the Club’s young players with valuable experience heading into the 2016 season.

Billy Slater and Jesse Bromwich will be travelling with the team for the entire tournament and will be assisting the coaching staff.

Storm fans will be able to catch a first glimpse of off-season recruits Jeremy Hawkins, Mark Nicholls and Curtis Scott while excitement machines Cameron Munster and Marika Koroibete will also make the trip along with Kiwi international Tohu Harris.

Under 20’s Thunderbolt Brodie Croft and Sunshine Coast Falcons hooker Nafe Seluini will also be new faces to Storm fans at the tournament. Both youngsters have been reward for strong pre-seasons and time spent training with the NRL squad over parts of the summer.

The team has been drawn in the Waiheke Group against the Roosters, Rabbitohs and Eels in games to be played across February 6-7. In the lead up to the tournament, the Club will visit Jesse and Kenny Bromwich’s junior club, the Manurewa Marlins and also take part in a Fan Day in Auckland on Friday.

Storm will play their first game of the tournament against Parramatta before facing the Rabbitohs later in the afternoon. They will then kick off Day 2 of the competition against the Roosters.

Photo: Blake Green will skipper the Storm in Auckland. (nrlphotos.com)

Eastwood to captain Bulldogs in...