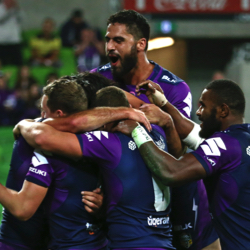 Melbourne Storm will open the 2016 season with back-to-back home matches at AAMI Park against the Dragons and Titans.

With the complete draw for the 2016 NRL Telstra Premiership season released on Friday, Storm members and fans can begin planning their 2016 with the opening 20 rounds set in stone.

CEO Dave Donaghy today welcomed the release of the draw for the 2016 season, explaining the Club was excited ahead of the new year.

“It’s a great start to the year with two games at AAMI Park, it’s always nice to be at home,” Donaghy said.

Highlights of Storm’s 2016 draw include:

Melbourne will also enjoy a number of marquee fixtures again in 2016, including the return of Storm’s traditional ANZAC Day blockbuster against the Warriors at AAMI Park.

The Club will also take part in a historic double header to be played at Suncorp Stadium in Round 10, hosting the Cowboys in Brisbane before the Sea Eagles face the Broncos on the same night.

“We’ve been talking to the NRL about hosting the Warriors again on ANZAC Day at AAMI Park for quite some time now,” Donaghy said.

“It’s a marquee fixture for us and it’s terrific for our members and fans that it will continue in 2016.

“It’s also terrific to see the double header come to life. We have been in discussions with the Queensland Government and Suncorp Stadium about delivering this major event for quite some time.

“Storm has strong ties to Queensland, in building this event, we recognised the wider opportunity and focused on delivering some of the best teams in the NRL.”

Craig Bellamy’s side will travel interstate on 13 occasions in 2016, with games in Sydney, Townsville, Canberra, Brisbane, the Gold Coast, Newcastle and Auckland to provide the Club’s loyal supporter bases in those areas a chance to see their side in the flesh.

The bye weekends arrive in Rounds 12 and 18, coinciding with the first and third matches of State of Origin.

Melbourne will play five Monday night matches and five Sunday afternoon matches in the opening 20 rounds of the season.

The remaining schedule for Rounds 21 to 26 will be announced by the NRL later in the season.