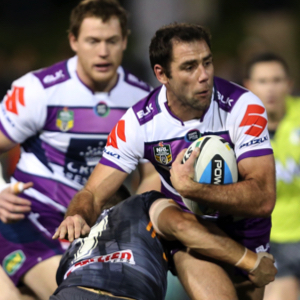 Melbourne Storm has today announced it will host one of its 2016 trial games on the Sunshine Coast in February, bringing rugby league back to the region for the first time in seven years.

Storm will play Wests Tigers in the February 13 match at Sunshine Coast Stadium and will spend three days in the sunshine state hosting an open training, Billy’s Buddies clinic for kids and beach session as a chance to meet and interact with local fans.

The day itself will be a festival of rugby league with Storm’s feeder teams and NYC squad to play in curtain raiser matches from 2.30pm before the first grade game between Storm and the Tigers kicks-off at 5p

Sunshine Coast Mayor Mark Jamieson said, “The Sunshine Coast is truly becoming Storm’s home away from home and we can’t wait to see Craig Bellamy’s team here in action in front of their growing Coast membership and supporter base in February.

“It’s going to be a big night for everyone here who loves their footy.

“The last NRL trial on the Sunshine Coast was back in 2009 when Melbourne beat the Broncos so I’m sure the appetite to see a match of this level in their own backyard will be there with our region’s league fans.

Melbourne Storm Football Director Frank Ponissi said, “As a Club we are looking forward to visiting the Sunshine Coast again, this time bringing a trial match to the local community who have a great love of rugby league.

“Not only are we looking forward to playing the match at Sunshine Coast Stadium, but also running an open training and beach session during our three day visit.

“This trial game against Wests Tigers will be an important part of our preparation in the lead up to the 2016 season and provide a number of players the opportunity to stake a claim for positions ahead of Round 1.

“I’m sure we will see plenty of our loyal Queensland based fans out in force, in what will be a great day of league with all Storm’s grades on show.”

Tickets to the game go on-sale today via the Sunshine Coast Stadium website and fans are encouraged to purchase tickets early to avoid missing out.

The Dick Smith Auckland Nines tournament will again feature as part of the NRL’s pre-season schedule with the team travelling to New Zealand for the two day tournament on 6-7 February at Eden Park.