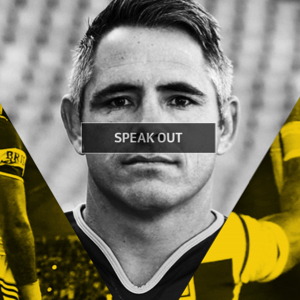 NRL CEO Todd Greenberg was supported by CEOs from the Australian Rugby Union, Australian Football League and Netball Australia at a joint meeting with Our Watch, an independent, not-for-profit, domestic violence organisation.

The show of solidarity re-emphasised the importance of the need to eradicate domestic violence within Australia.  Figures reveal that on average, at least one woman a week is killed by a partner of former partner and one in four women has experienced physical or sexual violence by a partner.

“We have met today as a single sporting voice – to stand up, speak out and take action against domestic violence wherever and whenever,” Mr Greenberg said.

“Domestic violence is not an issue confined to sport – it is a societal issue to deal with.  Collectively, our sporting codes recognise that we have a big supporter base and an even bigger responsibility to use our voice and our heroes to educate everyone that violence of any kind against anyone is never ok.”

The four sporting codes have signed a leadership statement, pledging to work together to eliminate violence, promote women’s participation and opportunities within sport, challenge gender stereotypes and roles and encourage respectful, healthy and equal relationships on and off the field.

Our Watch CEO Mary Barry said sport had the potential to play an even greater role in preventing violence against women and children and bringing about equalisation for all.

“Sporting codes, clubs and organisations bring together large numbers of people and are a ready-made environment to promote opportunities to eliminate gender-based discrimination and violence-supportive attitudes,” Ms Barry said.

“I commend the NRL and other codes for using their collective influence to assist in bringing awareness to an issue that is now recognised as one of the most serious and widespread problems within Australia, with enormous individual and community impacts and social costs.”

The NRL recently received additional funding from Our Watch to help support a series of resources and education tools to reach more regional and rural communities throughout Australia, New Zealand and the Pacific.

As a result, a new grassroots ‘Voice Against Violence’ program has commenced targeting junior Rugby League clubs with education messages and support in a bid to stop domestic violence in its tracks.

The program is being led by NRL ambassador Alan Tongue, with Tongue assisted by Clubs and ambassadors.

Further information on the program can be found at www.nrl.com/voiceagainstviolence

Maroons too strong for