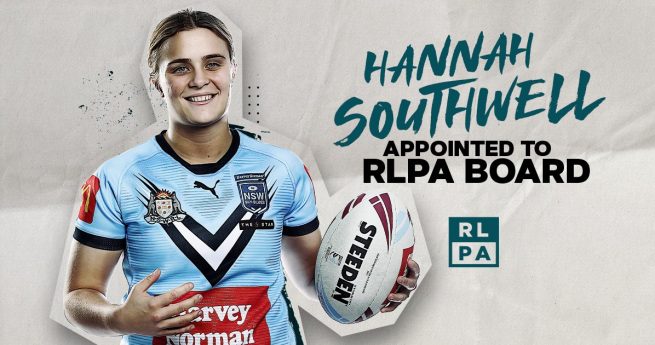 The Rugby League Players’ Association (RLPA) is pleased to announce the appointment of Hannah Southwell to its Board of Directors.

Southwell becomes the RLPA’s first-ever female player Director after being appointed as a casual vacancy at last night’s Board meeting.

Southwell expressed her excitement at the opportunity to actively contribute to advancing her fellow players and the game.

“I’m proud to join the RLPA’s Board and be able to represent my fellow players at this level,” Southwell said.

The Australian and New South Wales representative forward is also part of the RLPA Women’s Player Advisory Group that was established earlier this year.

RLPA Chair Dr Anderson welcomed Southwell to the Board.

“On behalf of the RLPA Board, it is with great pleasure that I welcome Hannah as a Director,” Anderson said.

“The women’s game continues to grow rapidly and having female player representation is integral to the direction of the Association.

“I look forward to working alongside Hannah and I have no doubt that she will make an outstanding contribution to the RLPA and its members.”

RLPA Chief Executive Officer, Clint Newton, said Southwell was a tremendous addition to the RLPA Board.

“After a number of recent conversations with Hannah it is clear she will bring significant energy, insight and passion to our Board,” Newton said.

“Hannah brings a tremendous amount of knowledge to the fold having represented Australia, New South Wales and excelled in the NRLW.

“I have no doubt that Hannah will be an invaluable asset as we continue to navigate our way through the impact that COVID-19 has had on the game, while also turning our focus to establishing collective agreements for our male and female members.

“This has been a long time coming, but we are extremely proud to now have a female player, and one of Hannah’s calibre, appointed to our Board.

“It’s worth noting the quality of the candidates who chose to step forward and fill this role.

“It is a clear demonstration of the passion that exists in the group and the opportunity they have to drive the game forward.

“Those players, coupled with our Women’s Player Advisory Group leadership structure, will play an essential role for the RLPA and our ability to continue advancing the terms and conditions for current and future NRLW players.”

Southwell is the reigning NRLW Players’ Champion after being voted the best player by her peers in 2020.

Southwell will be put forward for formal election at the next RLPA Annual General Meeting.

Join our team: Media and...