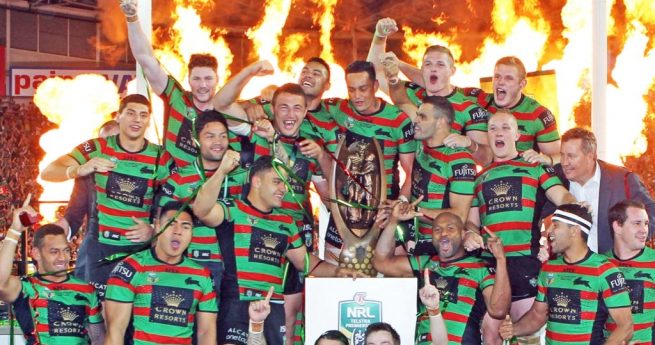 After 43 long, long years South Sydney are the toast of rugby league once again.

In a tough and courageous 80 minutes that crafted a new chapter into rugby league folklore, the Rabbitohs ran away with a 30-6 win over the Bulldogs to earn their first title since 1971.

In front of a record crowd of 83,813 at ANZ Stadium, departing star Sam Burgess wrote himself into the history books with an effort to rival one of Redfern’s favourite sons in John Sattler.

Forty-four years after Sattler played out the 1970 decider with a broken jaw, Burgess played 80 minutes of the 2014 Grand Final with a fractured cheekbone, suffered in the very first play of the match in an accidental head clash with close mate and fierce rival James Graham.

Plenty of Souths players were shedding tears after the full time siren, along with thousands of the Redfern faithful who flooded ANZ stadium in red and green. In touching scenes, Burgess and Graham embraced at full-time. Both tough Englishman were titanic throughout, as were Burgess’s younger twin brothers George and Tom.

The Bulldogs were brave in defeat and three South Sydney tries in the final seven minutes don’t do justice to the Bulldogs’ efforts. Their defence kept them in the contest right up to the closing minutes despite being on the wrong end of a mountain of possession and field position from the cardinal and myrtle.

Both sides battled bravely without their star hookers as well, with Apisai Koroisau impressing for Souths in the absence of suspended rake Issac Luke while Moses Mbye replaced injured Bulldogs skipper Michael Ennis, who is bound for Cronulla next season.

Souths held onto a slender 6-0 lead at half-time and were up by just eight heading into the final 10 minutes – nothing like a safe lead – but blew the game apart with a late try-scoring blitz to send their fans into raptures.

The brutal first half kicked off with that furious kick return from Sam Burgess on the very first play and never eased off from there. A couple of handling errors from the Dogs gave Souths the type of field position that they usually capitalise on, and it looked to have counted against Canterbury when Lote Tuqiri crossed after just six minutes. When Perrett fielded a Reynolds bomb then dropped it in the tackle, Souths spread it wide to Walker, who created some space and turned it back in for Tuqiri who was too strong one-on-one. However the video referee found a swinging arm from Reynolds on Perrett as he lost it, resulting in a no try ruling and penalty to Canterbury.

The Bulldogs continued to hang in there despite losing the territory game in the middle of the field but around 20 minutes into the match had a genuine opportunity to post first points after just the second penalty of the game. However when Tony Williams failed to hold onto a Trent Hodkinson short ball at the line it unravelled and Souths finally turned their dominance into points shortly after.

With Sam and George Burgess continuing to churn out massive metres it was a huge charge from the other Burgess, Tom, which scattered the defence and created an opportunity for Luke Keary. Spotting space down the short side Keary surprised the defence by going left and creating a three-on-two opportunity, with Kirisome Auva’a drawing the winger and lobbing the ball over Corey Thompson’s head to put 19-year-old try-scoring prodigy Alex Johnston over for his 21st try in just his 18th game.

Reynolds just missed the tough conversion but Souths were quickly back on the attack when a trademark Greg Inglis line break after fielding a kick had his side streaking downfield in pursuit. He was eventually rounded up about 30 metres out and with George Burgess having just left the field for a concussion check, Sam took the huge charge to the line and with the defensive line in disarray, Dale Finucane pushed at the ball in the play the ball to give away a penalty – and was lucky not to spend 10 minutes in the sin bin for his troubles.

With coach Michael Maguire signalling two fingers from up in the coaches box, Reynolds took the free two points from in front. From the resumption Souths quickly had the Dogs pinned back in their own half yet again and it was only a desperately needed Josh Reynolds 40/20 kick that ensured they didn’t slip further behind.

The Bulldogs almost crossed when Josh Morris latched onto a Williams offload at the line but good defence from Adam Reynolds and Dylan Walker denied the Origin centre an equaliser.

Despite South Sydney earning a few more chances at the Canterbury line, the half finished at 6-0. It was only an incredibly determined defensive display from the blue-and-whites that allowed them to be within six at the break despite being under the pump for most of the opening stanza. F

or all of South Sydney’s dominance, they found themselves level after 50 minutes of play when a precision Josh Reynolds grubber found Williams in the in-goal. It suddenly looked like the Dogs were starting to dominate momentum, and it was Sam Burgess, the right side of his face now completely swollen, who produced an amazing slips catch off another Reynolds grubber at the line to earn his side a breather.

It proved pivotal; at the end of the set some deft work by stand-in hooker Api Koroisau found a charging George Burgess, who replicated the type of try he had made a habit of scoring in his breakout 2013 season by charging through the line at pace.

Fullback Perrett had no chance one-on-one and the Bunnies were back in front by six with just over 20 minutes to play. The next points came from an Adam Reynolds penalty goal. With the Souths halfback having missed an almost identical chance a minute earlier after a Graham shoulder charge on Dave Tyrrell, Aiden Tolman gave up another penalty and Reynolds converted the 42-metre chance to stretch the lead to eight.

A massive – but legal – shot by Graham, looking to drag his side back into the contest, left Dave Tyrrell unconscious due to yet another accidental head clash and handed the Dogs an opportunity, but the Rabbitohs defence was good enough to absorb several repeat sets at the line.

With the clock starting to become a factor, some South Sydney magic rocked the Bulldogs and all but sealed the result. Chris McQueen produced a bat-back from a Reynolds kick to Inglis, who chipped for the back left corner of the Bulldogs in-goal. The wicked bounce beat both chasers – Alex Johnston and Corey Thompson – but Kirisome Auva’a was on hand to clean up the scraps and a clutch sideline conversion from Reynolds made it a 14-point ball game with six minutes to play.

With the result all but beyond doubt, Adam Reynolds scored himself after a John Sutton kick wrong-footed Perrett before Inglis sealed the win, running off Keary to streak 40 metres to the line.

Departing forward Sam Burgess was given the conversion attempt after the siren as a mark of respect for all he has achieved at the club. Despite the fractured cheekbone, and the tears in his eyes, the sideline effort went remarkably close but was just waved away.

It capped off an amazing night for the man who will be remembered as one of the all-time best English players to grace our competition, in which he finished with 225 metres, 36 tackles and the Clive Churchill medal for the best player on the field.