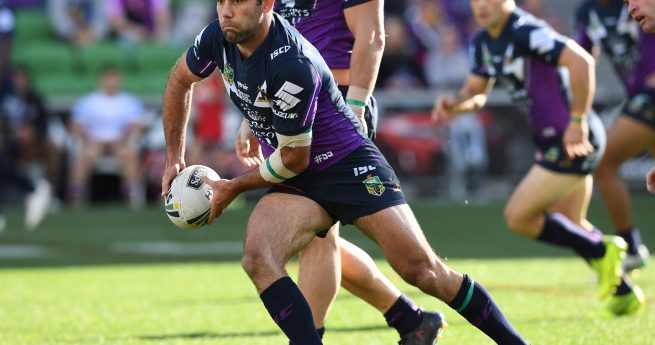 Cameron Smith will cement his place in rugby league immortality when he breaks the record for most games played in NRL history.

The incredible milestone will see Smith take his place atop the list of rugby league’s all-time greats including Lockyer (355), Terry Lamb (350), Steve Menzies (349) and Corey Parker (347).

The Storm skipper has enjoyed unparalleled success throughout his career, with his 355 games coming at a winning percentage of 70.7%.

After being recruited from junior club Logan Brothers, his NRL journey began at Melbourne’s Olympic Park back in Round 5, 2002 against the Canterbury Bulldogs.

Smith played two games during that debut season before making the No.9 jersey his own the following year with 24 appearances as he commenced his rapid rise into rugby league’s elite.

In 2006 he was named the Dally M Player of the Year before going on to claim the prestigious Golden Boot award the next season.

Captain of Melbourne since 2008, Smith’s leadership proved pivotal in steering the Club through a difficult 2010 season. His try that year against the Warriors in Round 7, remains one of the most iconic moments in Storm history.

In Round 2, 2014 Smith broke the record for most games played in Storm history, surpassing fellow Club legend Matt Geyer’s 262 appearances in the purple jersey.

Five weeks ago the 34-year-old joined Lockyer and Lamb as only the third player to enter the 350-game Club when he led Storm out for their Round 21 clash against Manly.

The 2017 season has seen Smith become the record holder for; most premiership wins, most goals kicked, most points by a forward and the first player to captain his side in 250 NRL games.

A six-time Storm Player of the Year and Dally M Hooker of the Year, Smith’s humble persona has seen him earn plaudits not only within but beyond the rugby league fraternity.

He has been a tremendous ambassador for the game throughout his decorated career and Saturday is set to be a proud moment for his family who have supported him throughout his remarkable journey, including his wife Barbara and children Jada, Jasper and Matilda.

Melbourne head coach Craig Bellamy acknowledged the incredible achievement of his captain on the eve of the record-breaking game.

“To see Cameron play more games than any other player is quite remarkable.

“It is an unbelievable milestone for him. He has had a lot along the way but this one stands him out as if not the greatest player of our game, certainly up there amongst it.

“He has had 15 years of absolutely high quality football. To play that many games in his position, to get himself up week after week is incredible.”

Storm will be celebrating #CAM356 throughout the week with special campaigns to be carried out across the Club’s digital and social media channels.

Social media platform Twitter will also celebrate the Storm captain’s milestone with the hashtag #CAM356 accompanied by its own Smith emoji for the week, a feature only reserved for significant and major events.