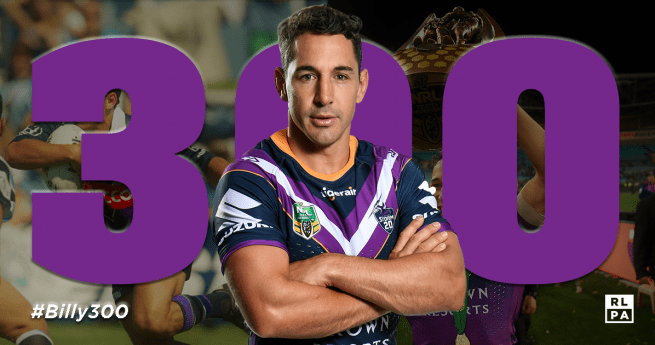 The Rugby League Players’ Association (RLPA) would like to congratulate Melbourne Storm fullback Billy Slater, who is set to become the 31st player in the game’s history to join the ‘300 Club’ this weekend.

Slater made his NRL debut for the Storm in 2003 and has since scored 183 tries – placing him second on the all-time try-scoring list behind Ken Irvine (212).

Slater has achieved an extraordinary amount of success during his NRL career – with some of his accolades including two premiership victories, Clive Churchill Medals, a Dally M Medal and a Golden Boot Award.

On the representative arena, Slater has won two World Cups and two Four Nations tournaments during his 30 Test Matches for Australia, while also playing in eight Queensland series wins during his 29 appearances.

The Innisfail Brothers junior will play his 300th game at AAMI Park tomorrow night when the Melbourne Storm take on the Wests Tigers.

The RLPA would like to send its congratulations to Slater on reaching the 300-mark and the impressive list of accomplishments within those games.