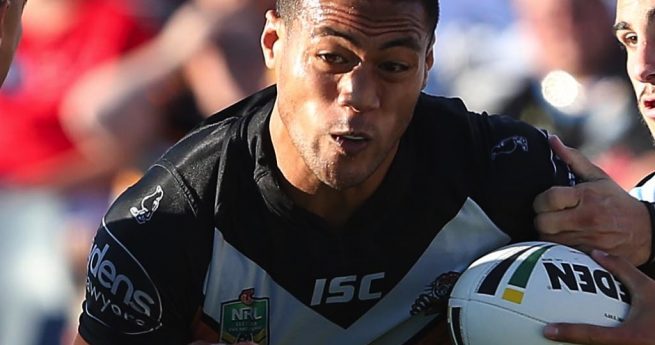 Tim Simona will remain with the Wests Tigers for the 2017 season after taking up an option to extend his contract with the Club.

A product of the Balmain junior representative system, the 24-year-old has scored 21 tries in 63 games for the Club since making his NRL debut in 2011.

Simona is currently in camp with the Samoan squad ahead of this weekend’s match against Tonga, which will be his fifth Test appearance after making his International debut in the 2014 Four Nations tournament.

The Doonside Roos junior said he was pleased to commit his future to the Club for another season.

“I’m obviously really happy to extend my time with Wests Tigers,” Simona said. “I love being part of the Club and playing with guys that I’ve known since I was a kid.

“To play another season at Wests Tigers is something I’m really excited about because I believe we have an exciting future ahead and we are headed in the right direction.

“I believe we can build something special with the group we have here and obviously that’s something I want to be part of.

“It was great to be back on the field last week and my goal for the rest of the year is to play every game and help the team build momentum while also improving my own attributes as a player,” he said.

“We are pleased that Tim has confirmed that he will take up his option for the coming season and remain with Wests Tigers,” said Pascoe. “Tim has become a mainstay of our side over the last few years and we look forward to him developing further at the Club.

“We’re committed to building a strong NRL side and to have players of the calibre of Tim, plus Josh Aloiai, deciding to remain with the Club in the last week is a sign that we’re heading in the right direction,” he said.

“What I’ve really loved about Tim this season is his energy, he’s brought so much of that to our team and our performances,” said Taylor. “His effort off the ball has been absolutely outstanding and then his creativity with the ball in his hands is as good as any centre in the game.

“Defensively he has kept improving, which has seen him reach a level where he is a real strong point in our defensive system,” he said.