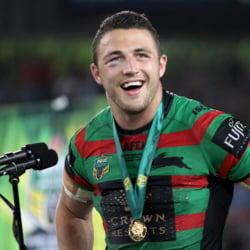 The Rabbitohs have confirmed the NRL has registered Sam Burgess’ contract clearing the way for him to play in the Club’s opening fixture against the Roosters in March 2016.

The Club has also announced the contract extension of Angus Crichton through to the end of 2018, and the signing of outside-back Hymel Hunt, 22, for the 2016 season.

Crichton, 19, joined the Rabbitohs’ under 20s squad in 2015 after representing the Australian Schoolboys in Rugby Union in 2013 and 2014. He played in the Rabbitohs’ championship-winning Auckland Nines squad last year and has been promoted to South Sydney’s full time squad for the 2016 season.

Hunt (centre/winger) joins the Rabbitohs with four first grade games under his belt, one for the Gold Coast Titans in 2013 and three this year for Melbourne Storm.

He was a Junior Kangaroo representative in 2013 and played in Queensland’s Intrust Super Cup Grand Final with Storm affiliate, the Easts Tigers, in 2014.

Hunt is now looking forward to settling into Rabbitohs camp and working on developing his game.

“This is a great opportunity for me,” said Hunt of his arrival at Redfern.

“I’m looking forward to knuckling down this pre-season and really trying to improve on my game under ‘Madge’ and give myself the best opportunity to play first grade.”

Crichton echoed the sentiments of his new team mate.

“I learned a lot throughout the 2015 season and I’m looking forward to building on that this coming year,” Crichton said.

“We’ve put in a lot of effort so far this pre-season and I’m looking forward to getting out on the field and improving my game.”

“Both players have plenty of potential that we’ll be looking to develop during this pre-season with the help of the staff and the rest of the boys here in the squad,” Maguire said.

Woods to captain Tigers in 2016