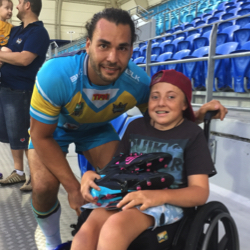 Gold Coast Titans firebrand forward Ryan James has decided to cut short his trademark flowing locks – all for a 13-year-old Brisbane boy who stole his heart the last time the Titans played at Cbus Super Stadium.

James was asked to pose for a photo with the family of Harrison Wheatley, of Wynnum, after the recent victory over Penrith. When they pointed him towards ‘Harry’ who was sitting on a wheelchair in the stands, Ryan leapt the fence and climbed the seats to not only pose for a more personal shot with the youngster, but present Harrison with his football boots.

When he found Harrison has a congenital cervical spine disorder that has restricted him to a wheelchair since he was a toddler, yet wants to walk the last kilometre of the City 2 South fun run on June 14, Ryan was further inspired by his story.

Harrison’s aunty Tracy will push his wheelchair for the first 4km of the fun run before Harry will get to his feet and walk the last km, by pushing the chair himself.

He had sought sponsorship on his Everyday Hero account with funds to go to the Starlight Foundation who he has seen bring so much joy to children during his many stints in hospital.

Ryan and fiancée Ana are getting married in July and Ryan had been considering whether to bow to Ana’s request to prune his trademark long hair for the wedding day. That’s hair that has had nothing but a slight trim since he was 14.

But now, to drive awareness to Harrison’s fund-raising efforts, he has decided to have his prominent dark locks cut short mid-season and seek donations for Harry’s cause.

Titans fans have only even known Ryan as the tough forward with the signature look of having his long hair wrapped in a bun on match days. He will look dramatically different with “short back and sides”.

“We were just blown away Ryan’s generosity in jumping the fence and giving Harry his boots, that was far beyond our expectations of what anyone would do,” says Harrison’s mother Julie.

“But once Ryan looked into the history of Harry it showed his spirit and kindness to do a massive thing and cut his hair short to help Harry help other people.

“We have always told our children there are people worse off than what our challenges are daily. What the Starlight Foundation does for children in hospitals is amazing and their room at the Mater Hospital in Brisbane got Harry through a lot, especially during a four month stay he had when he was just turning five.

“Harry just wants to raise money to help Starlight because he sees how special their work is for other children and for Ryan to go out of his way to help him is really special.”

James said it was a spontaneous reaction to climb the seats to talk to Harrison after the Panthers match but he was inspired by his spirit once he learned more of his plight.

“For him to get out of his wheelchair and walk the last kilometre of the fun run to raise money for others is a pretty mighty effort and I just want to help in some way,” said James, one of the most community active Titans players.

“I was looking to cut my hair shorter for the wedding and maybe get a charity involved to raise awareness and much needed money. But maybe it was meant to be meeting Harry and if people are happy to donate money to his fund if I cut my hair short, then that would be great.

“The Titans and the Starlight Foundation have had a close relationship for a while now, so it is a good fit.”

Harrison says on his fund-raising page:

“I am doing this run again as a personal challenge to myself and also to raise awareness for the Starlight Foundation which does amazing things for children who sometimes have it tough in life.

“They were a source of entertainment and distracted me from the reason I was in hospital. I was born with a cervical spine abnormality and have been in and out of hospital so many times. Thanks to Starlight for helping me get through.”

Harrison’s initial goal was to raise $500 but the Ryan James and the Titans are hopeful they can help him raise ten-times that amount.

Ryan will wait until Harrison completes his task on June 14 and will book an appointment with the hair-dresser for shortly after … with thousands of Titans fans keen to see the visual outcome!

Players take on State on Mind