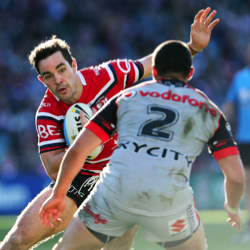 The Sydney Roosters have today announced that the Club has relocated their 2016 Round 5 home game against the Warriors from Allianz Stadium because of venue availability.

“Together with the SCG Trust and NRL, we have explored a number of options for this game and determined that the best option was to take the game to Central Coast Stadium at the scheduled time of Sunday, April 3 at 2pm,” said Sydney Roosters Chief Operating Officer Football, Brian Canavan.

The Sydney Roosters have an existing partnership with Central Coast Stadium which commenced in 2015, whereby one NRL fixture will be played at the venue each season over five years. Initial release of the 2016 NRL Draw advised this fixture to be the Club’s Round 9 match against the Knights on Saturday, April 30.

However, with the Round 5 match now being relocated to Central Coast Stadium, the Roosters’ Round 9 match against the Knights on Saturday, April 30 will now be played at Allianz Stadium, re-affirming the Club’s commitment to play 11 home games at Moore Park.

“This is the best solution to ensure we honour our commitment to Sydney Roosters Members, Corporate Partners and fans that 11 home games will be played at Allianz Stadium,” said Jarrod Johnstone, Sydney Roosters Chief Commercial Officer.

“Having said that, we enjoy strong support on the Central Coast, and this has been further strengthened via our partnerships with the Wyong Roos and Central Coast Division Rugby League, so we’re looking forward to hosting what’s sure to be a terrific day of Sunday footy out at Central Coast Stadium, when the Roosters host the Warriors,” he added.