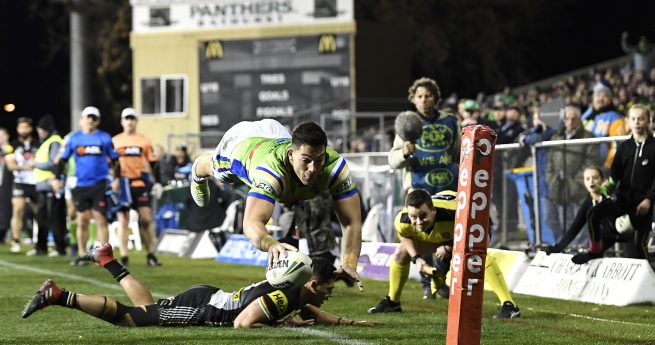 RLPA.com.au each week provides an update on NRL rookies around the Clubs, highlighting the best performers in the lead-up to the Rookie of the Year medal at the annual Players’ Champion awards night.

It was the rookie outside backs who stood up in Round 14, with Canberra’s Nick Cotric and Canterbury’s Marcelo Montoya excelling once again over the weekend.

Cotric scored a double in his side’s narrow loss to Penrith in Bathurst, taking his tally out to eight tries in 14 games this season.

Montoya helped break a four-game losing streak for the Bulldogs, running for a massive 154 metres and scoring a try in his side’s victory over St George Illawarra on Monday.

In other notable performances, Penrith rookie Corey Harawira-Naera crossed for his fifth try of the season, while Raiders forward Royce Hunt became the 36th player to debut in 2017.

Cotric, Jayden Brailey (Sharks), Brian Kelly (Sea Eagles) and Moses Suli (Wests Tigers) have played every match for their respective teams this seasons, placing them as front runners for the Rookie of the Year award this season.