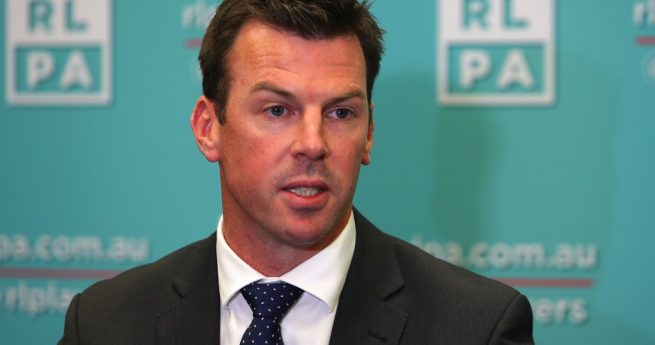 The Rugby League Players Association is looking forward to further discussions on the NRL’s proposed ‘blueprint’ for the Game.

The plan, drawn up by the NRL’s Head of Game Strategy and Development, Shane Richardson, was announced today with the aim to improve player welfare and pathways, upgrade and strengthen the second tier and assist in protecting elite players from burnout.

RLPA Chief Executive, Ian Prendergast, says the discussion document is promising but he looks forward to working through the consultation process with the NRL and Clubs on behalf of players.

“The announcement today is a high level summary and we’ll need to discuss the proposals in detail so we can better understand the intended and unintended impact on our members and the Game,” said Prendergast.

“We have been assured by the NRL there will be genuine consultation with Players which will be critical to the outcomes that are reached.”

Prendergast says there appears to have been some consideration of player feedback in drafting the proposal.

“It’s encouraging to see player concerns around wellbeing and burnout have been put up for further consideration in the proposal” said Prendergast. “Recent discussions with the NRL and ARLC have been really productive.

“We look forward to this continuing in the new year with a view to resolving a number of outstanding issues and building a genuine partnership for the future.”

The key recommendations of the proposal include:

Mr Richardson said NYC and payments for Under 18 players – along with a new business model for the second tier – would result in a $20 million saving for the NRL clubs.

There would be a significant increase in expenditure in the pathways and in particular the second tier by the NRL.

“We are looking to improve and extend the pathways not detract from them,” Mr Richardson said.

Mr Richardson said a committee representing the State bodies would help determine the teams which take part in the Platinum League.

He said the models being shown during consultation for 11 teams in NSW competition were only examples to demonstrate how far the game could reach if the new League was established. But no determination had been made on the final makeup of the League.

“We want to give everyone the opportunity to play in the NRL – whether they come from the country, New Zealand, the Affiliated States, Pacifica or anywhere else in the world of Rugby League,” Mr Richardson said.

“This strategy is not intended to squeeze anyone out of the game – it is designed to include more participants than ever before.”

Mr Richardson said meetings had been held with all stakeholders and that consultation was on-going.

“Further consultation with the RLPA and other interested parties will be held before any final decisions are made,” he said.

“This is an exciting time for the game…we have an opportunity with the new broadcast rights deal to stretch our vision and allow the game to break out from some of the restraints of the past.

“Most importantly, we have started a discussion about the way forward and that has to be a positive start for the game.”