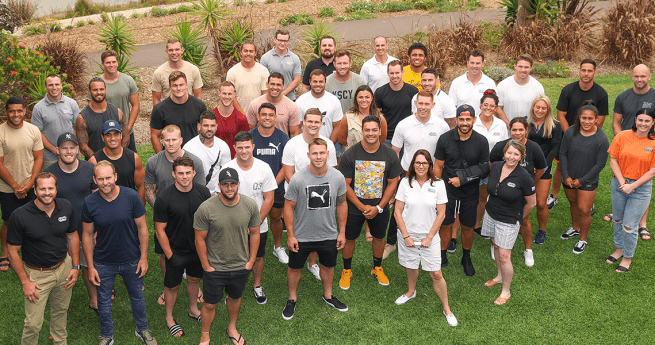 Close to 40 players from the NRL and NRLW competitions gathered at the conference, which focussed on leadership and connection.

Development sessions included a powerful presentation from big wave surfer and Red Bull athlete Mark Mathews titled Life Beyond Fear, as well as workshops on ethical decision-making, the role of an RLPA delegate and priorities for players and their Association.

Players from the RLPA’s Board of Directors, Player Advisory Group and Delegate structure formed a large part of the attendance list.

The group discussed a range of key matters as part of the conference, including encouraging the NRL to further develop and embrace the partnership between the NRL and RLPA. The players were adamant that by working closely together the parties can achieve positive outcomes for the game.

Players also highlighted the need for Clubs to continue to prioritise the wellbeing and education program and players’ personal and professional development generally, with the group in agreement that engaging in something meaningful off the field has a direct and positive influence on their performance on the field.

The impact that off-field incidents can have on the game was also a matter the group covered.  While they were adamant that the vast majority of players are strong role models and maintain high professional standards, they also acknowledged that there is an ongoing need to invest in the personal and professional development of players to ensure standards are elevated across the board.

The players agreed that the best approach to managing this area is through identification and prevention measures, believing that this will have the greatest impact on mitigating risks associated with decision-making.

The players expressed concerns in relation to the restrictions that the introduction of trade and transfer windows could have on players.

Players felt that introducing trade and transfer windows will do little to minimise the speculation that occurs around player movement and believe that players would carry unreasonable risk if those windows reduced their current freedom of movement. It is important that players are able to secure their future employment for any period that they are uncontracted.

They also expressed concern regarding the ‘shoulder-tapping’ behaviour that exists within the game and believed that more needed to be done to protect players from being moved on during the term of their contract.

With the level of scrutiny on players through traditional and social media greater than ever, the group discussed the need for further investment to ensure players are properly equipped to deal with this pressure.

Players also agreed that more needs to be done to protect players from vilification and racial abuse online, with frustrations centred around the lack of accountability for perpetrators.

Building stronger relationships, based on mutual respect and trust, with traditional media was also seen as an important focus area.

The group felt that more work needed to be done to protect players from being unfairly attacked in public – with players often facing tough sanctions for being involved in such incidents, notwithstanding the significant provocation that has occurred and the player’s attempts to defend themselves or their mates.

Finally, players encouraged the NRL, Clubs and RLPA to continue to invest in raising the professional standards and capabilities across all aspects of the sport, in order to enable the game to reach its full potential.

RLPA Director, Daly Cherry-Evans, said the conference was an excellent opportunity for players to connect and grow as leaders within the game, whilst also discussing how to approach a number of key issues in the game.

“The RLPA Leaders in League conference is an excellent initiative and something that I look forward to taking part in again,” Cherry-Evans said.

“It was great to see a variety of established and emerging leaders of the playing group coming together – it provided the RLPA with insights and feedback from a diverse range of individuals which I’m sure will prove valuable moving forward.

“I know the players who attended got a lot out of it and it is definitely something that the RLPA can build on in coming years.”

“I enjoyed the RLPA Leaders in League conference as it provided the opportunity for players from both the NRL and NRLW to engage and share their experiences,” Boyle said.

“I’ll definitely be encouraging more of the female players to attend next year’s conference as it was a great opportunity to connect with the RLPA.

“I’m grateful that the RLPA hosted this conference – the sessions relating to leadership were excellent and provided me with an opportunity to continue my development off the field.”