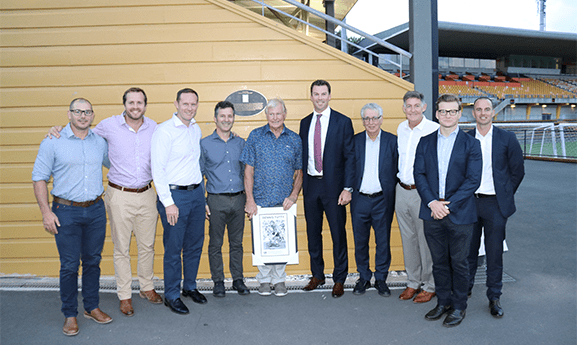 The Rugby League Players’ Association (RLPA) had the honour of attending the plaque unveiling ceremony for Dennis Tutty at Leichhardt Oval tonight – acknowledging the pivotal role that the former Balmain Tigers, Penrith Panthers and Eastern Suburbs forward had in advancing player rights.

An Inner West Council initiative, the plaque paid tribute to Mr Tutty’s courageous actions in challenging the New South Wales Rugby League’s retain and transfer system.  The case, the only one of its type to be determined by the High Court, ruled the system to be an unreasonable restraint of trade – establishing a precedent used in other sports employment cases.  Mr Tutty’s stance has also helped player associations negotiate fair employment conditions for athletes and develop comprehensive collective bargaining agreements with the governing bodies of sports.

Under the system that Mr Tutty challenged, Clubs were permitted to prevent any professional players from moving to another side – even if the player was no longer providing services for that Club.

Mr Tutty’s stance was motivated by a personal philosophy to ‘right a wrong’.  The legal challenge resulted in him sitting out during three seasons (1969-71) in the midst of arguably the peak of his career, which included him missing Balmain’s premiership in 1969.  He was not supported in his action by a club desirous of obtaining his services or a player association. He fought and funded the action himself – making his story even more remarkable.

At the end of the 1968 season, Mr Tutty requested clearance to join Penrith – which was denied by the Balmain Tigers and the NSWRL.

Following the lengthy legal process, Mr Tutty was eventually permitted to move to Penrith for the 1972 season and established the legal doctrine of ’Restraint of Trade’ in Australia.

Mr Tutty went on to play a total of 160 first grade games for Balmain, Penrith and Eastern Suburbs before retiring in 1976.

A special night honouring Dennis Tutty with a plaque unveiling at Leichhardt Oval tonight. Mr Tutty played a crucial role in advancing player rights in Rugby League, successfully challenging the NSWRL transfer system that restricted players from changing Clubs without the approval of their exisiting team. Past, present and future Rugby League players will forever be in debt to Mr Tutty for the selfless stance he took. Thank you to the @innerwest_council for inviting us to be part of this special occasion. #rugbyleague #nrl #rlpa

Mr Prendergast presented Mr Tutty with a special gift – a framed photo with the caption “Past, current and future Rugby League players will forever be in your debt for the selfless stance you took to advance player rights.”

Mr Prendergast said the plaque unveiling was a meaningful gesture to someone who helped shape the modern game of Rugby League and significantly advanced the rights of players across professional sport in this country.

“As representatives of modern day professional athletes, we stand on the shoulders of giants.  Those who have stood up for what’s right in the past.  Dennis epitomises that metaphor and had an incredible impact on advancing the interests of professional athletes,” Mr Prendergast. “To put your own playing career on hold and stand up courageously like he did – without any support from a player association or his fellow players – it cannot be understated how tough that would have been at the time.

“From a Players’ Association perspective, Dennis will always have a special place in our history and the sacrifice he made will never be forgotten.

“His legacy will live on through The Dennis Tutty Award that we present each year at our Players’ Champion event – which last year was won by RLPA board member – James Maloney.

“I want to take this opportunity to genuinely thank Dennis on behalf of the RLPA and its members – we would not be where we are today if he didn’t take that stance.

“Praise must also go to Mayor Darcy Byrne and the Inner West Council for recognising Dennis’ contribution to the game through this plaque.”

The Dennis Tutty Award is an integral part of The Players’ Champion each year and is awarded to a player that has “demonstrated the same qualities of self-sacrifice and courage as Dennis Tutty to achieve a better working environment for his fellow Rugby League Players.”

Maloney won the award in 2017 for the contribution he made to driving improved outcomes for players through the Collective Bargaining Agreement negotiations, while other notable winners since its inception include Petero Civoneceva, Andrew Ryan and Dene Halatau.