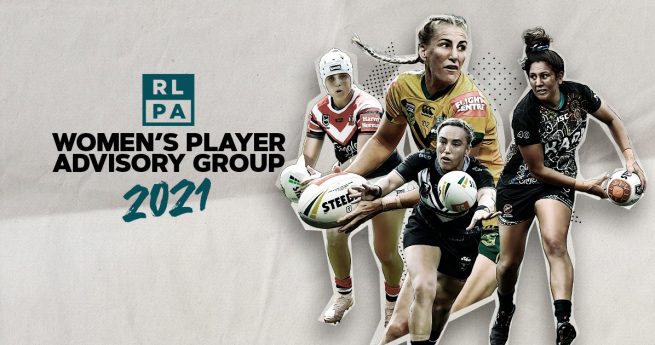 The Rugby League Players’ Association (RLPA) has established its first-ever Women’s Player Advisory Group, bringing together leading players to discuss important issues and provide direction on the current and future state of the game.

The Women’s PAG brings together some of the game’s most knowledgeable and respected players to proactively discuss matters across International, NRLW, State of Origin, State Premierships, and other relevant areas.

Whilst this group has been engaged in an informal capacity over the past year, the first official meeting of the Women’s PAG took place earlier this month, with the group passionate about continuing to advance the women’s game and ensuring players have a strong voice.

The concept has been successfully implemented over the past three seasons in the men’s game, and whilst the Women’s PAG will largely mirror that initiative, it will also take a holistic view of all levels of the female pathways and structures.

Two-time Women’s World Cup winner, Sam Bremner, said the Women’s Player Advisory Group will be a key vehicle in canvassing and voicing the views of players.

“It’s an exciting but also an important time for our game,” Bremner said.

“We’ve seen our game rapidly grow over the past few years, and we want to ensure that continues, whilst also putting things in place to protect the next generation of players.

“Part of that is working towards securing our first Collective Bargaining Agreement.

“It’s important that players are being heard and this group will provide us with a platform to discuss the key opportunities and issues in our game.

“I feel as though something like this has been a long time coming, so it’s really exciting to see it come to life.”

Premiership-winning forward and Australian International, Chelsea Lenarduzzi, said she was excited to work alongside other players from across the game as part of the Women’s PAG.

“This group is an important step in the progression and development of the Women’s Game,” Lenarduzzi said.

“There is genuine care among the playing group and we will endeavour to grow the game at all levels, not just the elite.

“Having an official seat at the RLPA table will no doubt help us drive the game to new heights.”

“Establishing a Women’s Player Advisory Group is a massive step forward for not just the players and the RLPA, but the game as a whole,” Caccamo said.

“Harnessing the collective views of the players and bringing them forward to help guide the game’s decision-making process can only be a good thing.

“An important responsibility for the players in this group will be engaging with their peers back at their respective Clubs and bringing forward the different perspectives.

“We are fortunate to have such a passionate group of players who truly want to advance the game, while also establishing a strong foundation for the next generation of players.”

Chair of the RLPA Board Dr Deidre Anderson said that championing Women’s Rugby League and the rights of our female athletes is an incredibly important part of the work the RLPA are doing.

“Witnessing the growth of Women’s Rugby League has been incredible and ensuring that these leaders have the opportunity to contribute when important decisions are being made is paramount,” Anderson said.

“I look forward to supporting this group and watching our leaders continue to develop.”

The Women’s PAG will be discussing a number of important matters in the coming months, including potential changes for the 2021 NRLW season.