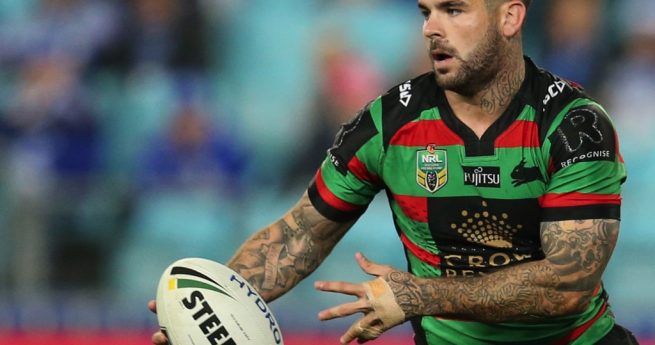 The South Sydney Rabbitohs have extended the contract of halfback Adam Reynolds for a further four years, meaning he will be wearing the red and green until at least the end of the 2021 season.

Reynolds has scored 853 points in his first grade career so far from 17 tries, 388 goals and nine field goals; and sits in third position on the all-time first grade point scorers list for South Sydney behind only Eric Simms and Bernie Purcell.

Reynolds made his State of Origin debut for New South Wales in 2016, and has represented the Australian Prime Minister’s XIII, City Origin, the World All Stars and the NRL All Stars.

Rabbitohs Head Coach Michael Maguire says to have Reynolds’ signature secured long term further solidifies his squad as they build for the future.

“Adam has been one of the key leaders in our team and is really influential in our playing group as a leading figure alongside players like Inglis, Sutton, Clark, Sam Burgess and Goodwin,” Coach Maguire said.

“He is a huge asset as a mentor to our emerging leaders and has a strong desire to add to the great achievements he has already been a part of with this Club,

“Adam Reynolds is one of the elite players in our game. His ability to guide the team around the field, as well as his general play and goal kicking makes him instrumental to our success. Reynolds is hungry, as are the rest of the playing group, for success at this Club,

“He is also very settled off the field. He has a beautiful young family including his bride-to-be Tallara and his three kids, and he is doing a great job balancing his elite football career with bringing up a young family.

“Adam and I both believe he has his best football in front of him and we’re excited about working together to see that evolution of his game over the next five years.”

Adam Reynolds is pleased to continue his career with his childhood Club and is excited by what the future will bring for him and the Rabbitohs.

“I grew up in the area and it’s been a real honour to be able to represent the Rabbitohs and to continue representing the Rabbitohs is something I’m really proud of,” said Reynolds.

“I’ve got a lot of great memories of growing up around Redfern and developing into the player I’ve become today. I’m happy that my family and I can remain here and continue representing the community through the Rabbitohs,

“We have a great bunch of boys at this Club and I’m looking forward to what we can achieve in 2017. We finished 2016 strongly and I think we’ve laid a good platform to really challenge in the coming years.”

Kangaroo call up for Jake...