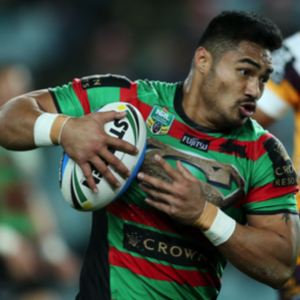 The South Sydney Rabbitohs have announced the re-signing of centre Kirisome Auva’a for the 2016, 2017 and 2018 seasons.

Auva’a, 23, has played 26 NRL games for the Rabbitohs since making his debut for the Club against the Panthers in round six, 2014.

Rabbitohs Head Coach Michael Maguire is pleased to have Auva’a signed to the Club long term.

“’Somi’ has grown as a player and we’re looking forward to seeing him perform week in and week out in the 2016 season and beyond,” Coach Maguire said.

“Somi has worked very hard away from the game throughout 2015 to get himself in a position to make contribution again on-field, and we’re all looking forward to continuing that work with him into the future.”

Auva’a is appreciative of the opportunities given to him by the South Sydney Club and its Members.

“I’m very grateful for everything South Sydney has done for me over the past two years,” Auva’a said. “This is the Club I want to play for. From giving me a shot at first grade, to supporting me through a difficult period over the past 18 months, this Club means the world to me.

“I love playing with my teammates, for the coaching staff and for the Club, and its awesome Members. The support the Members give me and the rest of the team is unbelievable.

“I’m so happy to have this contract sorted out and am looking forward to preparing for 2016.”

Centre of Excellence for...